Camilla Engman is a Swedish born artist and illustrator who lives and works in Gothenburg.

No I don’t, I could even say the opposite. I’m from a working class home. There was no encouragement, but not otherwise either. I do not remember when I decided to work towards being an artist. I think I needed another way to express myself than those which was available.

What’s more satisfying, the process of creating something or the
final product? 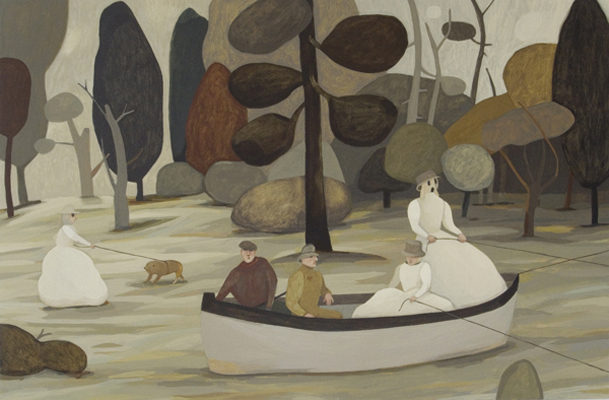 Is there music that you think of when you see your work, maybe music that brings back memories from making the work?

If I could have decided what I would of be good at I would have chosen to be a musician. Music! It goes straight to your heart and you have nothing to say about it. I am also jealous musicians get to work together in groups and that the spoken language doesn’t mean much. If I’ve been listening to something during my work I can remember it when looking at the final piece.

Does Scandinavian folklore feature in your work?

Not that I’m aware of…

Are your paintings creating folk stories of their own?

I don’t think so… 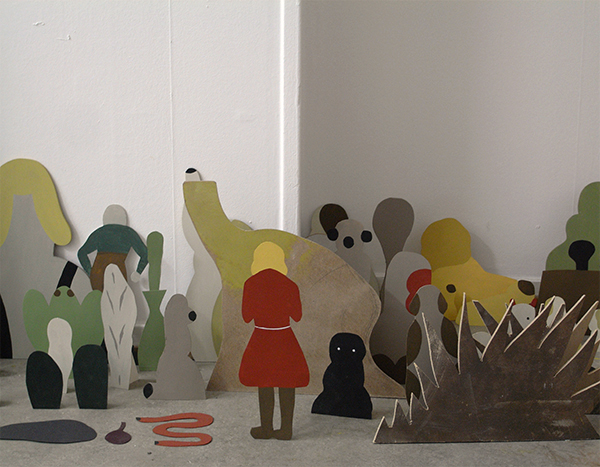 What’s the thinking behind you cut out figures?

The cut our figures are usually sketches for my paintings. I re-use them, re-birth them. Cutting them out and place them in a new different environment is very satisfactory. Often I play with paper when I don’t know which way to go, where to turn. It gets me going and hopefully in the right direction. 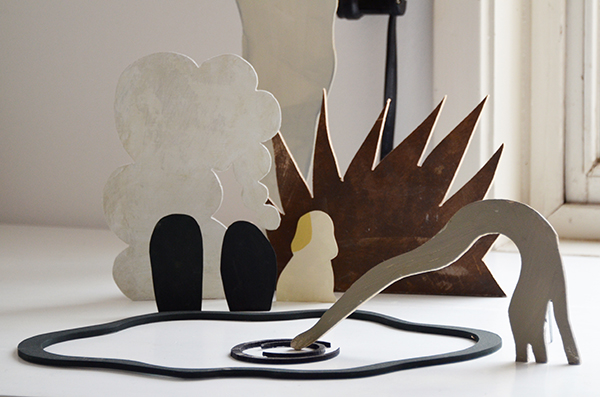 You often use earthy colours. What effect do you want to achieve with this palette?

It is not on purpose. I wasn’t even aware of it before someone asked the same question as you do now. I just use the colours that feels right. Now when I’m aware of it I sometimes try to work in another direction but it seems impossible to end somewhere else. These are my colours apparently. 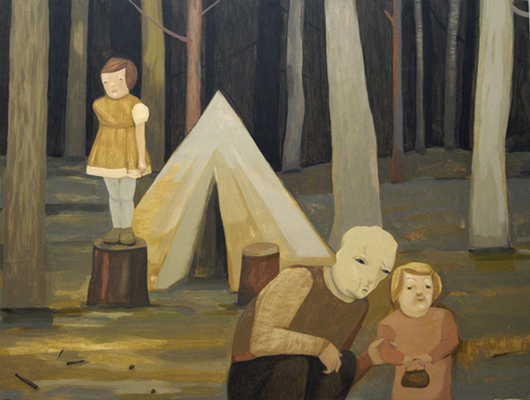 I find your work familiar like an old children’s illustration but also unnerving and menacing. Is this something you aim for in your work?

I try not to think to much while working, not to use my brain too much but my gut and spine. I like to be a bit unaware of where I’m heading, to be surprised myself. This might sound a bit corny but… sometimes when it works I get a feeling to be connected to an inherited image/feeling bank and that is what makes them familial. Or maybe it is just like you say, they look like old children’s illustration. But that is not what I am looking for. It is another world, a parallel one. Just like ours but more quiet and slower, twisted but more honest. It’s the same struggle, loneliness, to belong somewhere, to be human.

Your work also looks quite dream like. Do you ever get an idea for a painting from a dream or a nightmare?

No I don’t, at least not consciously. I think it is more related to my work process. While working I feel like everything is clear and OK (just like when you dream, nothing is impossible and everything can be normal). When it is finished it is harder for me to understand and the only thing left is clues and pieces.

I am very attracted to the fact that most things has two sides. That cuteness is so close to something that is scary. That a small shift changes the entire feeling of what it is we see.

Is selling a piece of work or receiving praise about your work more of a motivation for creating new work?

To work, to “solve the problems” is was motivates me most. But of course receiving grace helps too, to self-confidence a boost. I would be doing what I do even if no one wanted it or liked it. It might have taken another turn and it sure wouldn’t have been as fun. 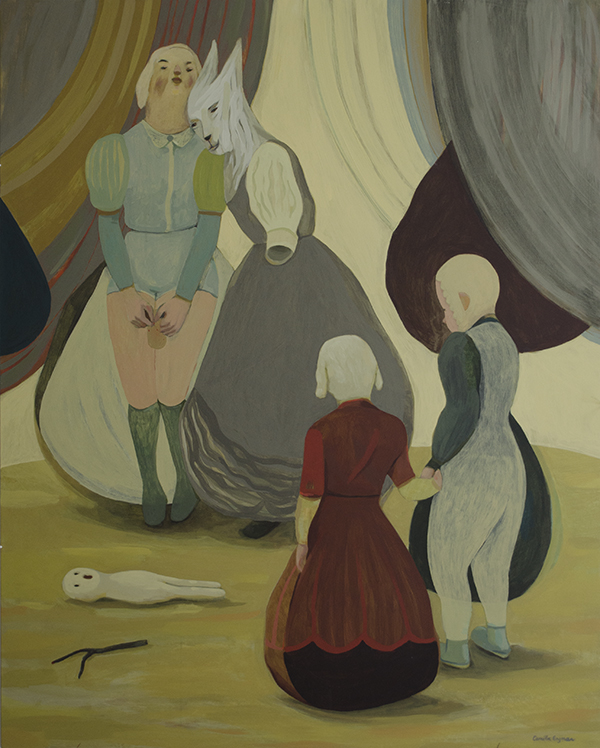 What would you make if money and time was not an issue?

I would pretty much do the same. If time and money wasn’t an issue I would also love to learn more, take classes. Preferably in something that has to do with art but anything creative would be fun.

The Work of Alex Roulette
All, Pick from the Web

The Work of Alex Roulette