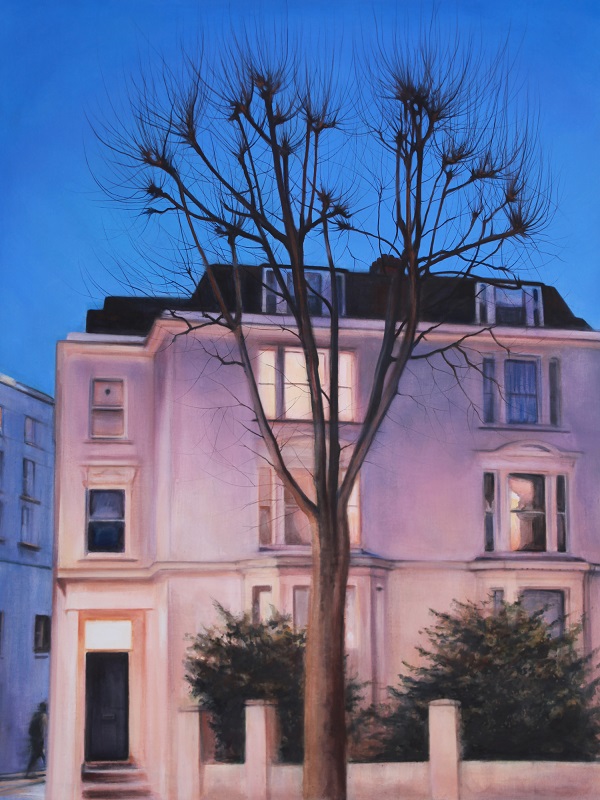 Georgia Peskett graduated from the Epsom School of Art and Design in 1984. She has displayed her paintings across the country and belongs to a number of Notable Collections.

My father and mother are artists. They got together in the 60’s. She was studying fine art at Kingston art school and he was studying at the Royal College of Art.
I grew up into a fairly bohemian world of artists and eccentric characters. My mother tells me that when I was a baby, David Hockney would stop by for coffee and discussions at the bedsit they had in Ladbroke Grove, off the Portobello Market (a very different place then.) My father was part of that Pop art movement that came out of the RCA in that period along with his other contemporaries Derek Boshier and Peter Blake.

I learned a lot from growing up in a home that was also a working studio: I think it all kind of becomes second nature. At an early age I believed that most other people were also artists. Large abstract canvasses lined the halls. I recall clearly the colours and the smell of the fresh oil paint, that’s the stuff that stays with you.

My introduction to the world of art education was good for providing some structure and discipline to my early practice. Epsom Art School is where I studied and also where my father started out, it had a good reputation for nurturing young talent. I was an unconventional student and recall many days spent on The Downs broadening my mind rather than spending all my time in the classroom. That was all a part of my personal process. 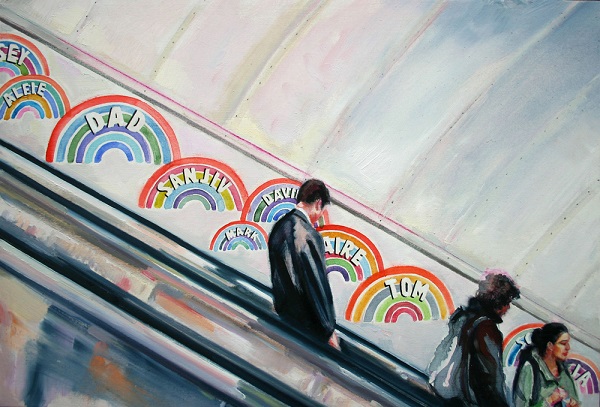 What’s more satisfying, scouting out imagery or turning the imagery into paintings?

The images (photographs) play such a large part in the works: I enjoy the discovering of a place, person or a moment. It’s exciting to get that perfect shot without being noticed, if a person you’re photographing sees your camera that moment is lost as soon as they become self-aware. Timing is everything, being in the right place at the right time for all the conditions to work.
It’s hard to say which I prefer more as they are both essential to the whole. If I had to decide which act is more satisfying, it’s the painting. That process is more of a final stage and takes it into a new realm. An element of surrealism takes place; somehow the paint brings magical realism into the image 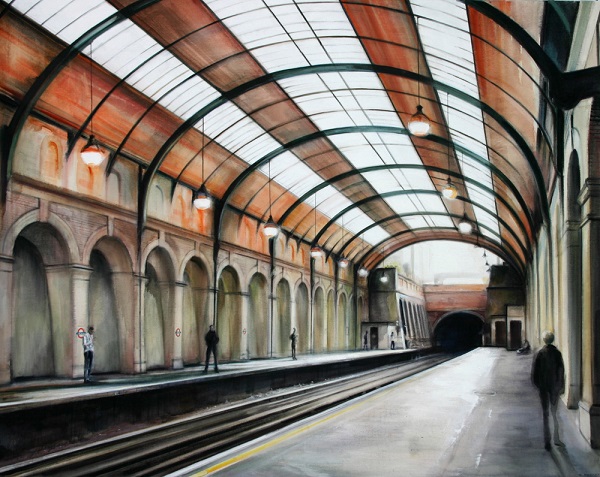 How important is selling your work in motivating you to make more work?

Selling paintings can help, it covers the studio rent and of course it buys you time to make new work. However, it is not my motivator. I’m motivated to push my work to new levels, to create that final piece that says everything I wanted. I’m more interested in whether or not that work gives me a certain feeling when I look at it.
Usually I find that if I’ve achieved that for myself then the work also strikes a chord with the viewer and with the right exposure sales often follow.

How do you think an artist should balance their artistic integrity against creating work they know they can sell?

If an artist is painting with the aim of selling that piece of work, the process is somehow that of a manufacturer. I believe that it’s important to separate the idea of end gain when creating anything. That can be hard for some commercial artists to do.
It’s maybe better not to rely on one’s art for an income if at all possible. Money as a motivator isn’t the same as natural inspiration. 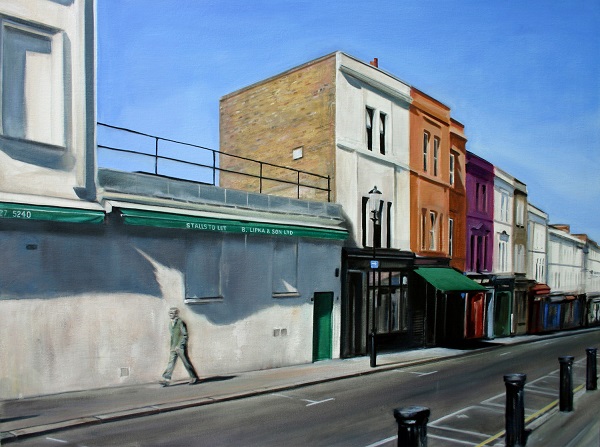 I hope my paintings convey a sense of peace and spaciousness within the urban environment. They are definitely my personal escape; at the time of painting them I’m in that place virtually. I hope to convey as much of that as I can to the viewer so they experience that same presence and essence in the painting. I spent my childhood and much of my youth in and around cities, London and New York where I lived for some years after my study in England. This informed my style and really shaped me as an artist.I found that my work flourished when I decided to move away from the city (London) for various reasons. I have family in London, San Francisco and friends in New York. I make trips to cities I love as often as I can with fresh eyes each time.

Living right in it can almost blind you to its details – you look at something too long and you don’t see it anymore. This works for me, as I need that solitude and peace to create the work. 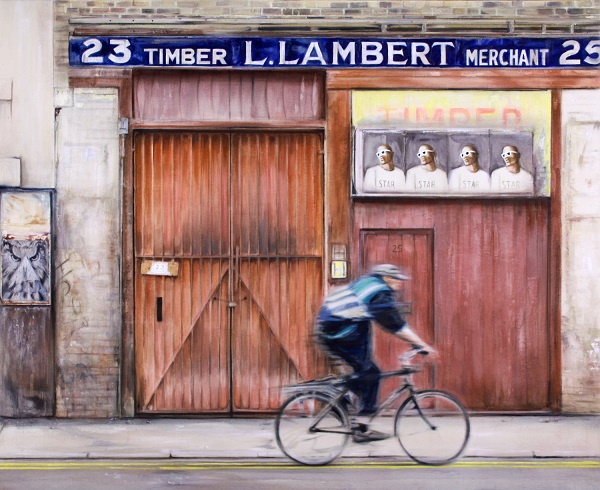 Are you more inspired by exploring cities or galleries?

That is often coincidental and can happen in both situations, the most unexpected things can inspire me; just recently it was the colours of steel escalators in the underground. Another time it was the intense colours in the work of Yayoi Kusama at the Tate.

To be honest, that idea has never appealed, I’m happy working in solitude.
The quiet that I find in the studio is what helps me to go into the work; painting in those conditions is almost a meditative state. I’m not keen on being disturbed, for that reason I’ve chosen a fairly solitary location for my practice. I can be there all day and not see any one; the phone is often on silent. 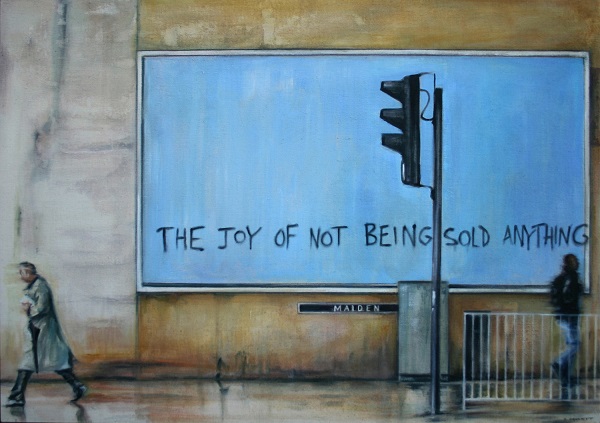 The people you capture often look as if they are engrossed in their own world. Do you wonder about their thoughts and what might be happening to them before and after the moment they were photographed?

Yes I do, although we don’t really have any idea what may be going on for others: I create a narrative when I’m working with images with inhabitants in. I imagine each viewer has their own narrative running. After all, we all see different things when we look at the same things, don’t we?
The feedback has often been very interesting at private views to hear people tell me what they see in the paintings. Bringing figures into my urban landscapes often brings that back-story in, allowing the viewer’s imaginative process to join in. I’m fascinated by people and enjoy people watching. 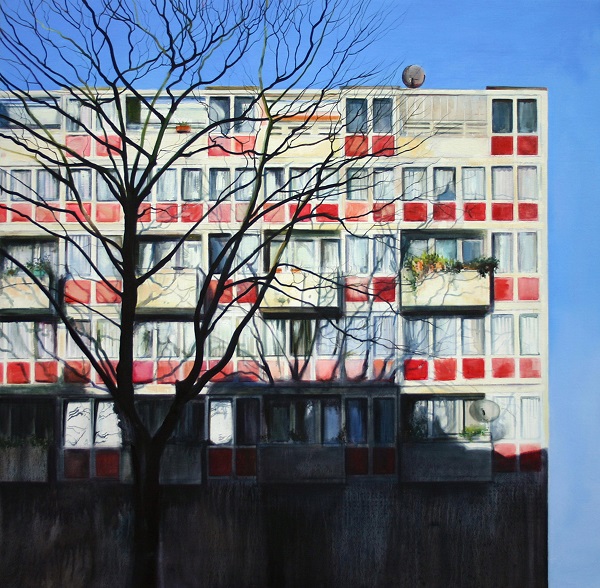 Do you have different feeling towards painting New York and San Francisco or are they part of the same metropolis?

They all represent connections I have with these places, different visits and stages in my life. Some of my cityscapes are loaded with nostalgia. Progress was is one of those very personal paintings that represent the time I spent as a young painters’ apprentice in New York when I finished art school.
I have recently begun working on a collaborative project with a friend in New York, photographer Linda Covello who takes beautiful shots. We’ve known each other’s work for many years; she sometimes sends me images that she thinks I’d like to work with. I’m working on a selection of these at the moment. I don’t think this would work as well without this kind of connection between the photographer and painter. 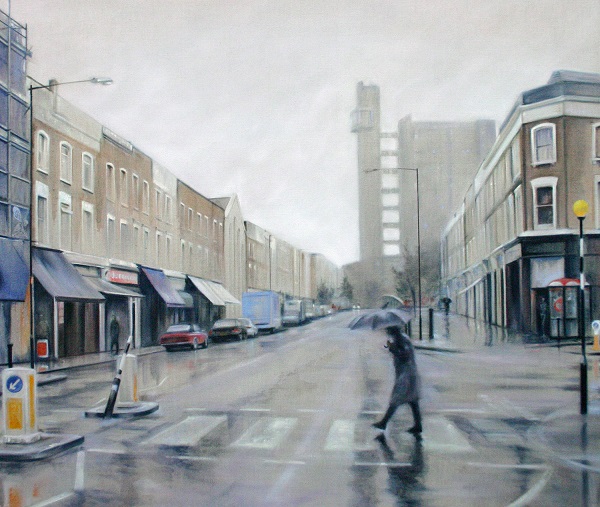 Do you see the photos you take as having any artistic merit or do they simply fuel your paintings?

A couple of galleries have commented on the quality of my photography over the years. In the early days before my painting style had emerged a gallery owner I knew suggested I focus on just being a photographer. I ignored the advice and continued to develop both skills.
I see photography and painting as two equally important halves of what I do, I enjoy the photographic process as I do the editing of images pre-painting stage. The photographs inform my paintings. Paintings I used to make from memory seemed to be lacking something, that’s when I decided to always carry a camera. I would like to curate a show with a selection from the archive of many thousands of images I now have. Perhaps they can be included if I ever have a retrospective.

You have done several paintings around Little Venice, is this a special place for you?

I do like that area as the water seems to give the images a mystical quality, the peace of a canal that runs through a busy city, it has its own quiet about it.

Are there any other cities you would like to explore and document?

I would love to explore Asian cities someday, Hong Kong and Beijing are beautiful cities even with the high pollution levels, the images could be great, not so good for the lungs.
I do like to see where the mood takes me but for me, having some kind of background connection to an image is great but that doesn’t happen everywhere.

Georgia will be exhibiting her new paintings at the Reading Art Fair, from the 26 – 28 April