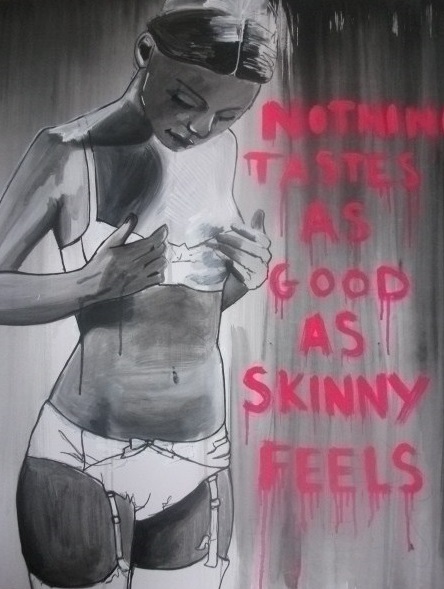 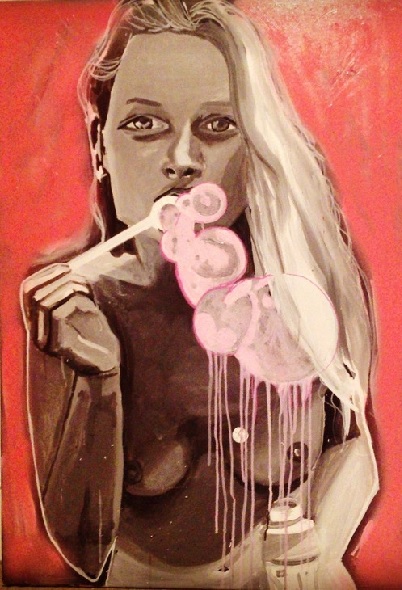 From an early age I have had an interest (border lining obsession, as do so many things I turn my attention to) with depicting females. I love to paint the female form and even more so, the female face. I contort it with massive doe eyes filled with sorrow and make up dripping down the surface. My studio, overspilling into my home, is filled with face after female face.  After one of my art tutors questioned me on my sexuality (straight), it provoked an internal look as to why and where this fixation stems from. The answer I have provided myself is that the satisfaction is not in portraying exclusively females but rather the vulnerability that is so much more apparent in women. It brings to mind a favourite quote of mine; ‘art should comfort the disturbed and disturb the comfortable’. My work is constantly referred to as ‘dark’, ‘unsettling’ even ‘disturbing’. I don’t shy away from that as it’s what I am most interested in illustrating and very much a reflection on myself. In that sense the artistic process is very cathartic.

‘Nothing Tastes As Good As Skinny Feels’ is a quote Kate Moss once said in an interview that was met with much controversy.  Having grown up with a mother who excels in the field of healthy eating and nutrition, I personally believe this to be true. Knowing that the mass opinion would disagree however made it a fun subject to construct an image around. Art should act as a catalyst for debate and I don’t believe sensitive subjects should be shied away from.  This image contrasts the visual beauty of models and the emptiness that fills (so to speak) so many of them.

One of my favourite subjects to paint is Kate Moss. Aside from the aesthetic satisfaction I remember reading an article on which she spoke of having to pose as young teenager half naked with Mark Wahlberg. She said she cried for hours after and found the whole experience quite unbearable. When I look at pictures from early on in her career I really feel you can pinpoint that deadness in the eyes, the dissatisfaction of her modelling obligations but hidden beneath an immaculate exterior. This juxtaposition is very satisfying for me as an artist to expose.