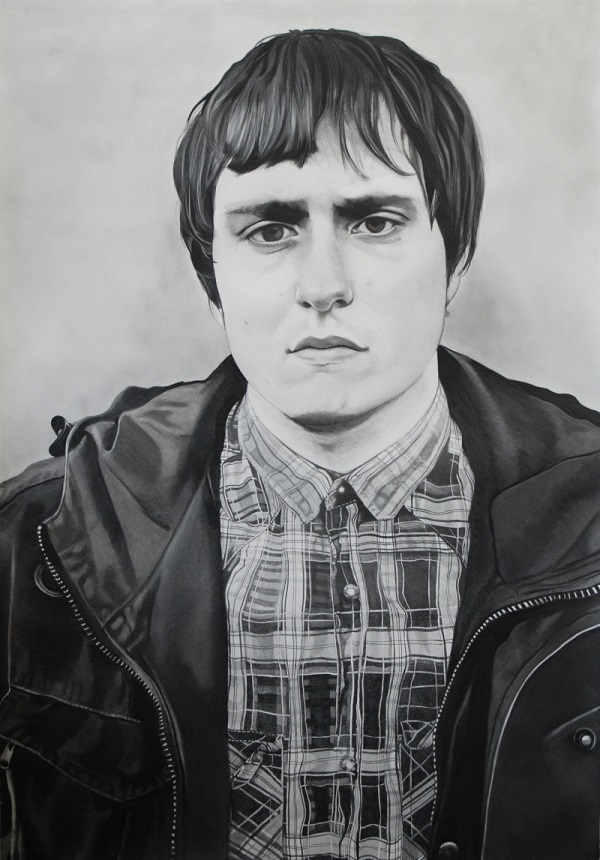 My aim is to make work which is ambitious. These large scale portraits (typically 1.14 x 1.63 metres) needed to be contemporary but not lose any of the sophistication of the skill involved in making them. The scale needed to be larger than work made previously and this paved the way for a number of changes in the way I thought about the work. I began thinking about each drawing as an object in its own right, moving swiftly away from the more conventionalised approach used previously. A new approach allowed me to focus on investigating the relationship between myself and the subject through a rendering of all the qualities that make up a subject’s personality. Previously the portraits resembled an overly stylised version of the person rather than having the strength of gaze which is at once captivating and sober. Technically, the surfaces of my drawings now hold much more visual information and investigate the nuances of each facial feature. Charcoal is quite an unpredictable medium but I enjoy its texture and the challenges of working it into and around the paper.

There is a tense look to some of these drawings which is not just an indication of the subject’s mood at that moment but also a result of the mutual relationship between artist and subject and this tension is magnified by its ‘larger-than-life’ size. Chuck Close has been a source of much inspiration in terms of the scale of the work being produced. His work is a lot larger than these but I am dealing with many similar issues such as how the viewer becomes involved in the heightened intensity of a large direct gaze. Equally fascinating to me is the idea of ‘mirror reflex’ and ideas to do with looking and being looked at. When Simon saw his portrait he stood in front of it for a long time apparently caught off guard at seeing his own mirror image, i.e. seeing himself as others see him. The disparity between the scale of the features in the portrait and the sense of scale the viewer normally has further heightens the intensity of this act of looking. My selection process is generic. For me, it’s not necessarily about gravitating towards people with features which are obviously striking or pleasing to the eye. I suppose the criteria are simple: a face that I know I can render well enough for the viewer to glimpse something of that person’s life or disposition. This is what I aim to capture and so how I choose my subjects is often down to who is around me when I’m making that decision. That being said, I want to see how the result would differ when drawing a complete stranger. I think there must be some discernible difference because I do not have any real connection with that person. 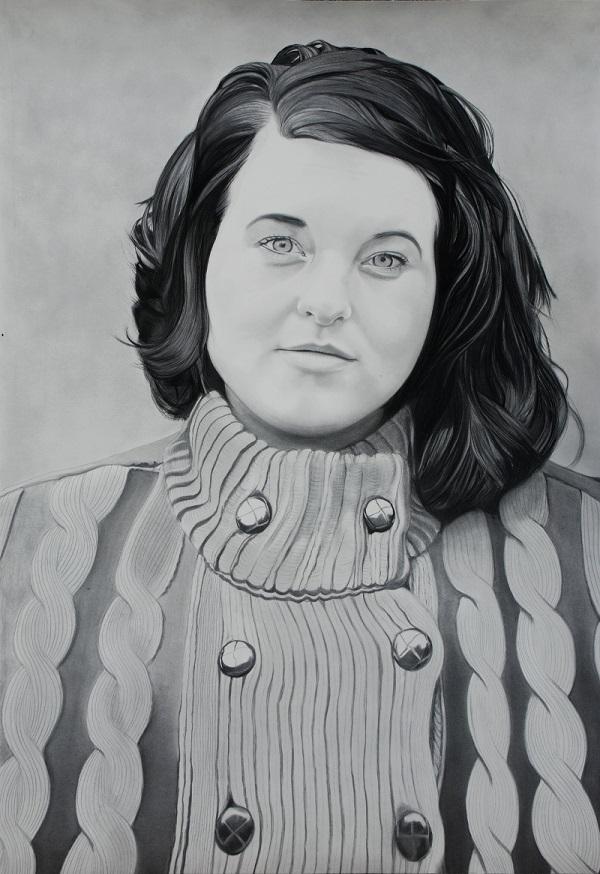 A main consideration for these larger pieces is the method of displaying them. Initially, I considered using MDF board to mount the drawings, making them even more substantial as objects. After testing this out with a smaller drawing I decided against it because the result was clumsy and the board took away from the intriguing quality of the edges of the paper. I decided to use magnets as this would avoid damaging the paper. Using disc magnets along the front top and bottom edges was too visible and the magnets became too much of a feature, not to mention the expense involved. After extensive research, I decided to use magnetic tape and steel strips running along the top and bottom edges, creating a bold and flush framing mechanism.

I think these portraits manage to retain a heightened sense of realism whilst not attaining a state of completely photographic realism. The last four years have yielded work that I am happy with and I have met some very supportive and honest people in that time. I feel like there is much more to this journey and I am excited to see what work I have yet to create.

Art Circus Spotlight
‘Edge of the World’ and ‘Echoes, Rhythms and Deep Flows’
By Dalit Leon