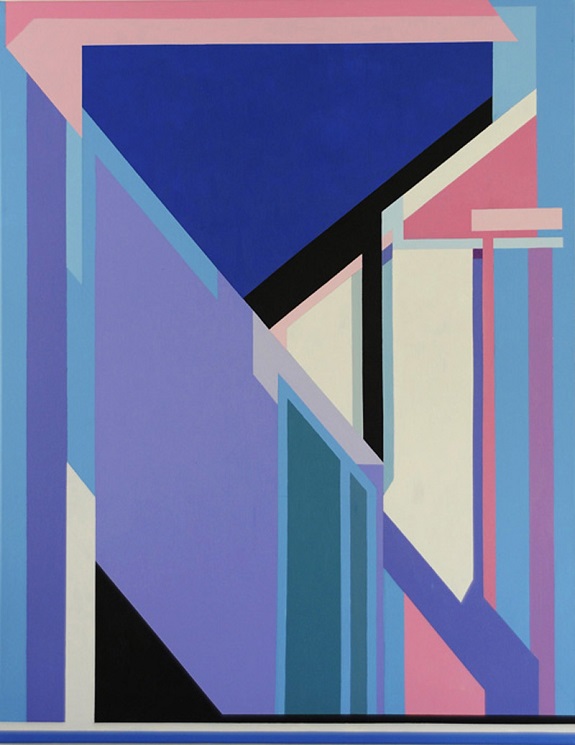 My prime interest is in spatial configurations of pure form and colour. To heighten this, I employ a rigorous hard-edge geometry, eliminating any obvious signs of brushwork, while favouring an extended family of hues that includes cerulean blue, prism violet, eau-de-nil, pinks, teal and, above all, black and white.

There are two distinct types of work – the static or “inclusive” and the “dynamic”.

The painting “Interior” is one of the former, an enclosed space in which the forms are self-referential, locking into each other in ways that raise the question of exactly what is interior and what is exterior, and whether it is in fact no more than just an arrangement of form and colour where the title is, in fact, misleading. By contrast my “black” paintings, a short series of four (an example being “Praxis”, shown below right), are “dynamic” in that the forms are not bound by the picture frame, but by using strong diagonals and large partial forms, have the capability of continuing virtually to infinity in some black void. 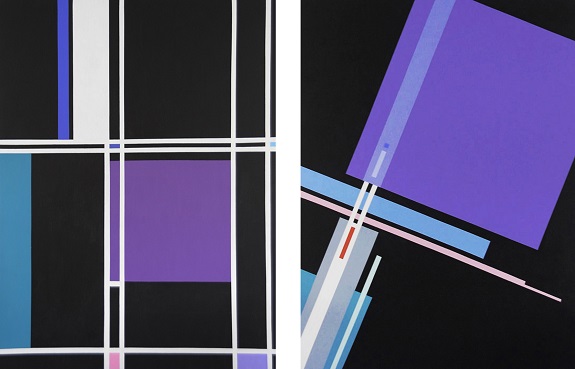 “Black Grid” (shown above left) lies somewhere between the two – an hommage to Mondrian, perhaps, but using my palette and the black background, the white grid also has the potential to extend beyond the frame, while the blocks of purple, teal and white are locked into their position between the verticals and horizontals, static, immovable, unable to shift even a fraction without destroying the balance of the composition.

I work entirely in acrylic on canvas, most paintings to date being no larger than 76 x 102cm to keep a sense of unity, but with a view to increasing the scale – and the palette – in the near future.

Ed Smith’s paintings are exhibited at Bistro 51, which is shared between 51 Buckingham Gate and adjacent Crowne Plaza St James, until the end of January. A viewing can be organized if visitors ask at the concierge desk.