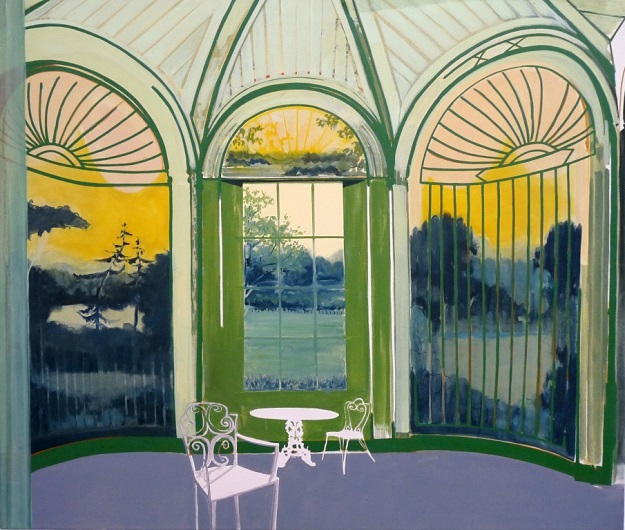 Yes absolutely, and that is exactly what my boyfriend paints. I have been more interested in the distortion of a narrative, or of a potential narrative, which is intrinsic to an empty room. Whether the drama has already taken place or perhaps they are a set for a dreamed life. I have more recently been playing with images with people, but they are more like the figures of Bonnard; handled in the same manner as the rest of the image. But it is early days for them.

How does being a relationship with a fellow painter affect your own practice?

It means I spend a lot more time talking about and looking at paintings than perhaps I would. That can only be a good thing for my work, although not necessarily for my social life. It’s extremely handy to have an honest critic at the other end of the phone, picture messaging is amazing. 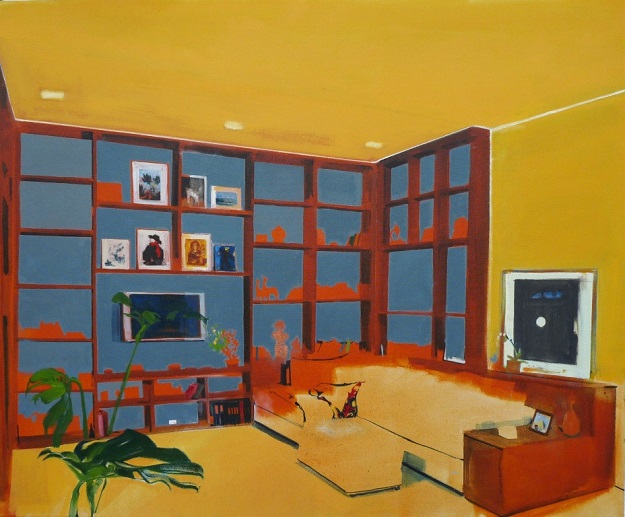 Are you more interested in these spaces and objects than painting figures?

Spaces and their objects are what interests me most to set a scene for a story. More recently figures have started to creep in, or perhaps emerge is a better word but they remain a part of the whole image, created in much the same way of flattened areas of negative space.

Do you see the paintings inhabiting the same world or stories? As one another?

That’s interesting. Not the same stories, and perhaps each story is its own version of the world, probably a lot like paintings.

Do you play out possible scenarios in your head when painting?

I get a thrill from exploring the spaces, hanging pictures on the wall, placing things on the surfaces, creating a rug for the floor. But I can’t say that there are defined characters or scenarios. Whatever I am reading, or listening to inevitably plays a part in the tone of the paintings however. 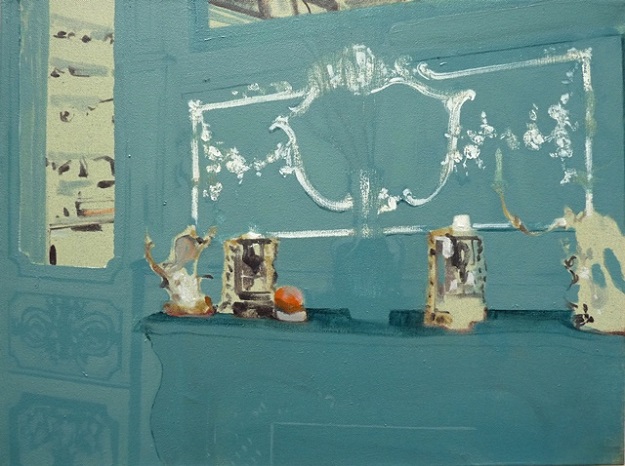 It feels like the each painting has a strong overall colour and tone. Do you see this and is this something you plan out?

That colour is usually the ground colour which I put down before plotting out the painting. I spend a bit of time looking at the original image before starting and usually it is a tone that runs through the photo. I like to allow the ground to show through; it contributes to the feeling that although they are recognisable and sometimes familiar in feel, on closer inspection the spaces are not quite right. 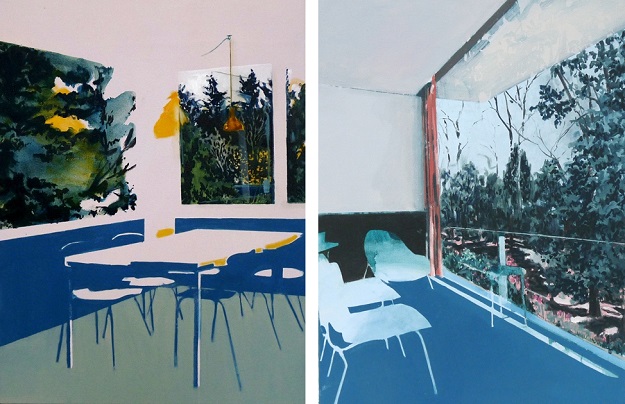 Some paintings are more abstract than others. Is this something you design into the painting or do you keep working into them until you feel they’re finished?

The ‘abstractness’ is usually a conscious decision, which happens fairly early on when I am sketching the painting out. I do think I have a problem with overworking and therefore, these are a constrained effort to leave the paintings more open.

How do you decide on titles and what do they add to the work?

Generally I find a title when the painting is done, and usually they come quite quickly. Sometimes from something I have read but largely they are my own. My trusty Thesaurus has come in handy a couple of times too. I would hope that the titles elude further to a narrative contributing to the sense of intrigue and ambiguity.

You combine lines, geometric shapes, and expressive marks very well. What does this juxtaposition add to the overall feel of the image?

I think it is definitely compositionally important. But also a lot hangs on what is and what is not included; a varying level of description across the picture plain which involves a combination of marks. 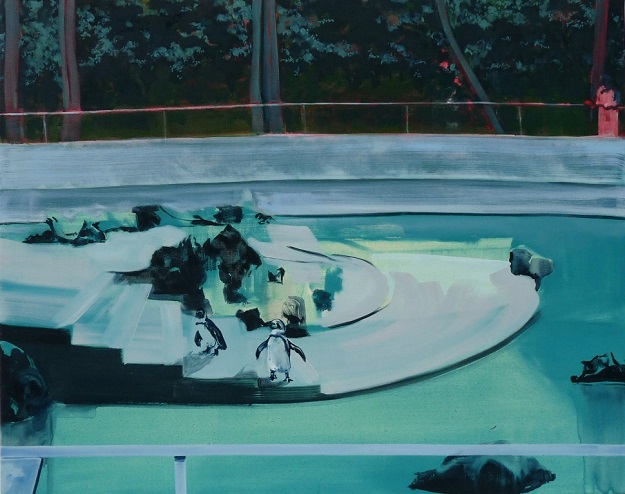 What drew to paint the penguins?

That was actually for a commission, but I thoroughly enjoyed them, and I have just started to paint other wild animals in captivity. A giraffe peeping through a window, and some monkeys on their climbing frame. It’s good fun.

I would happily never stretch and prime another canvas as long as I live. And I would try massive paintings too. Technical help might mean I can try things like printing which I am too impatient to make well. 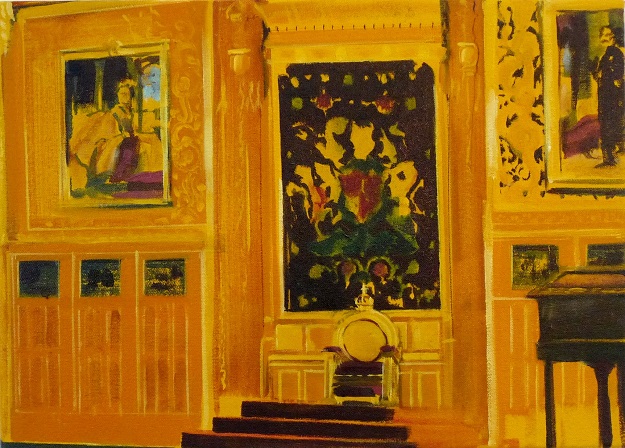 How did art school help, in the development of your practice?

Enormously. My practice wasn’t one before studying. I think the most important lesson I learnt was to better look and understand paintings. As well as the time to really practice, play and get to know paint and its habits.

How important to you is selling your work for you to make new work?

Quite, for two obvious reasons, one of which is financial, and the other is storage; my studio is quite small. I suppose it also clears my head as well as my studio. 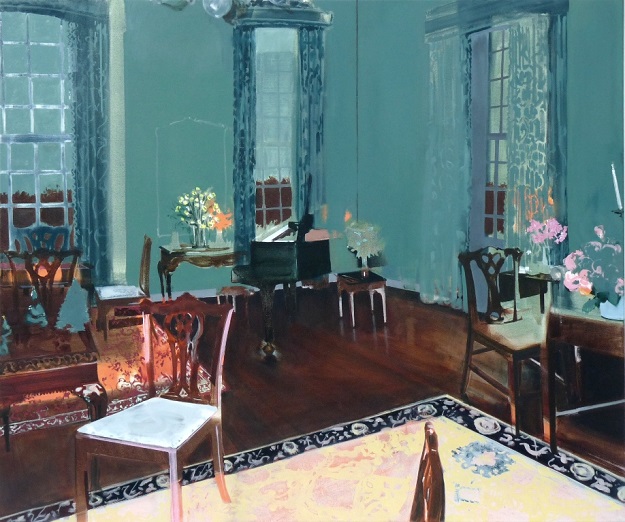 A tiny wooden 1950s telly my boyfriend bought me in my final year at uni from a car boot sale.

Is there music that you think of when looking back at your paintings?

Not music, but stories either from books or audio books. I love listening to stories read by a narrator.

What are you listening to at the moment?

I have lots of books on the go. Hilary Mantel’s ‘Wolf Hall’, which I would never make it through if I were reading it. My favourites to listen to are library are ‘Middlemarch’ and ‘Anna Karennina’, the characters are so varied and interesting and on every listen I understand them further. I have also just listened to ‘The Spy Who Came in from the Cold’ by John Le Carre, that time in history is fascinating. 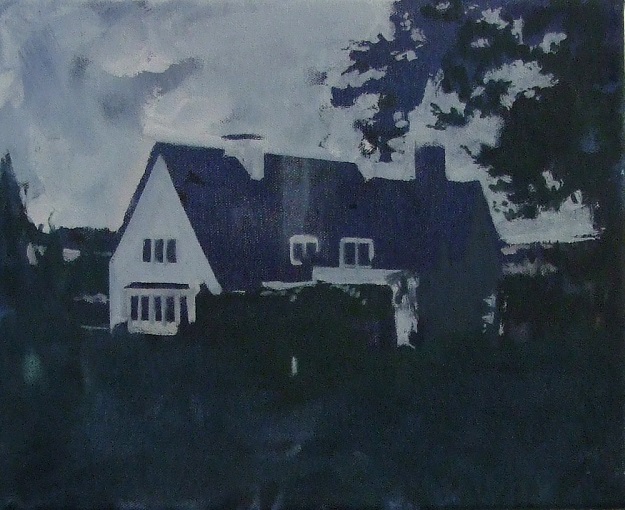 What are you interested in painting at the moment?

I have a couple of ideas bubbling. Gardens in the dark, which I first considered about a year ago. I think there is a mystery of the garden, and a fear I suppose. I am still afraid of the dark. People are starting to feature, but very much as part of the whole picture, not as a point of focus.

Does the ‘mystery’ and ‘fear’ of the subject matter drive your practice?

I am generally attracted to other painters’ work which has some sense of mystery or unease, so I would like to achieve something similar in my own painting. Although I don’t think I am there yet.

Eleanor Watson’s paintings can be seen in her solo show ‘In The First Place’, on from the of 15th November to 20th December 2013, at The Foundry Gallery, Chelsea.