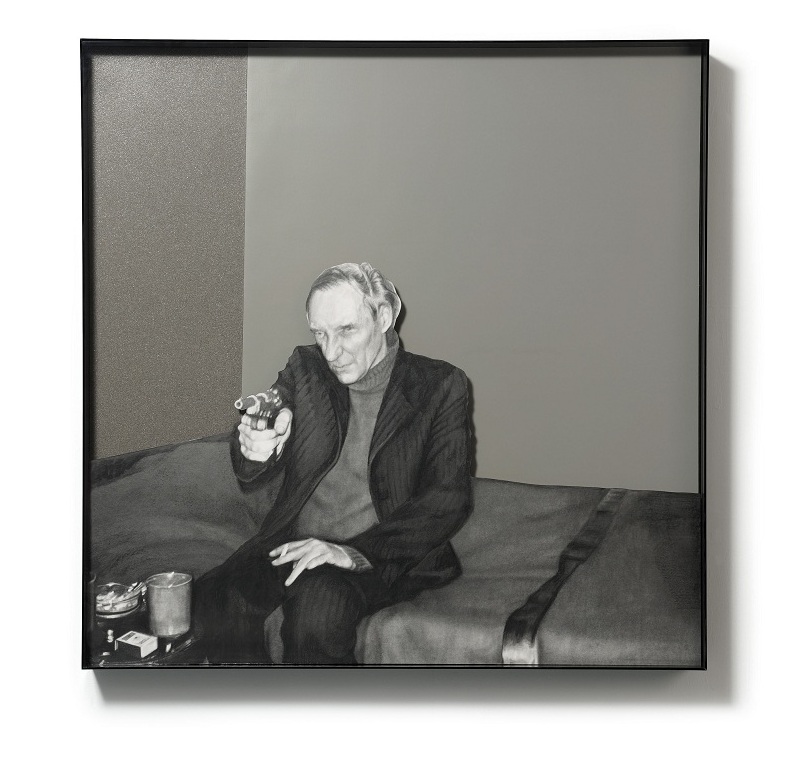 British writer, Barry Miles, took the original photograph this drawing comes from of William Burroughs in his Duke Street, St James, home in 1972. Miles states that he and his good friend Bill were enjoying a “somewhat drunken” evening in together as the slight blurring of the image suggests. This photo hangs in the living room of Miles’ home. 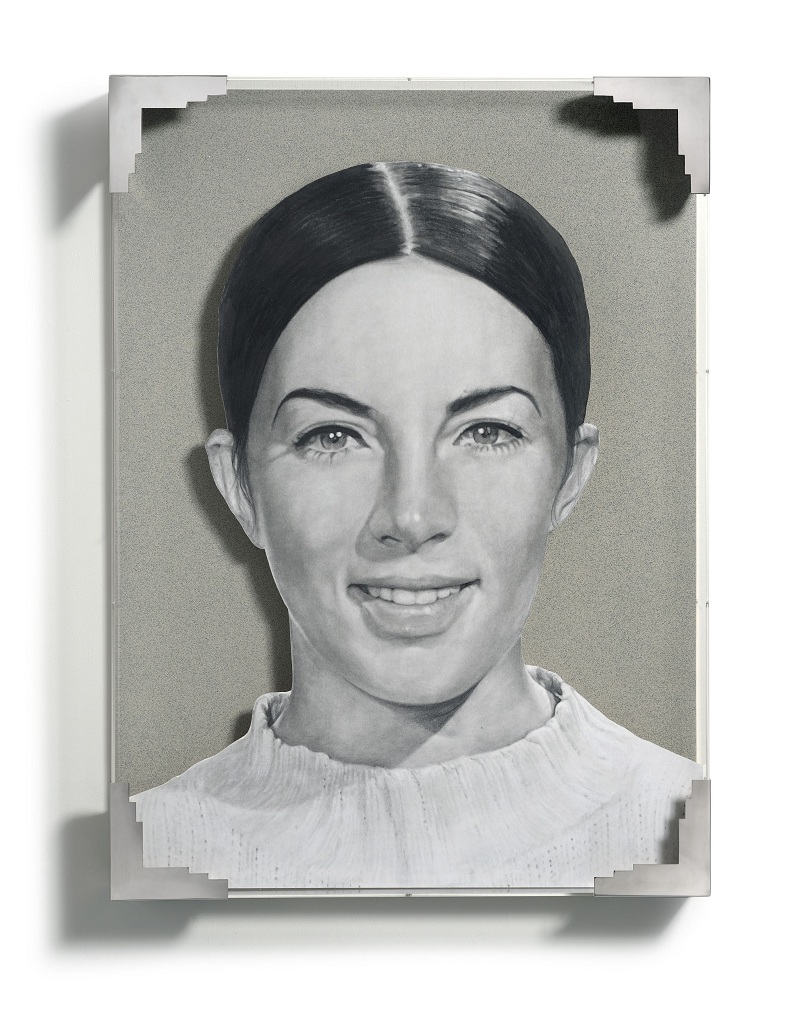 This image is taken from a passport booth photo of Carla Borel’s mother Jen. She was a dancer in Las Vegas during the 60’s and later moved to Paris where she danced at the Moulin Rouge and was to meet Carla’s father. Carla is photographer and uses only black and white film; she keeps the original picture hanging on her living room wall. 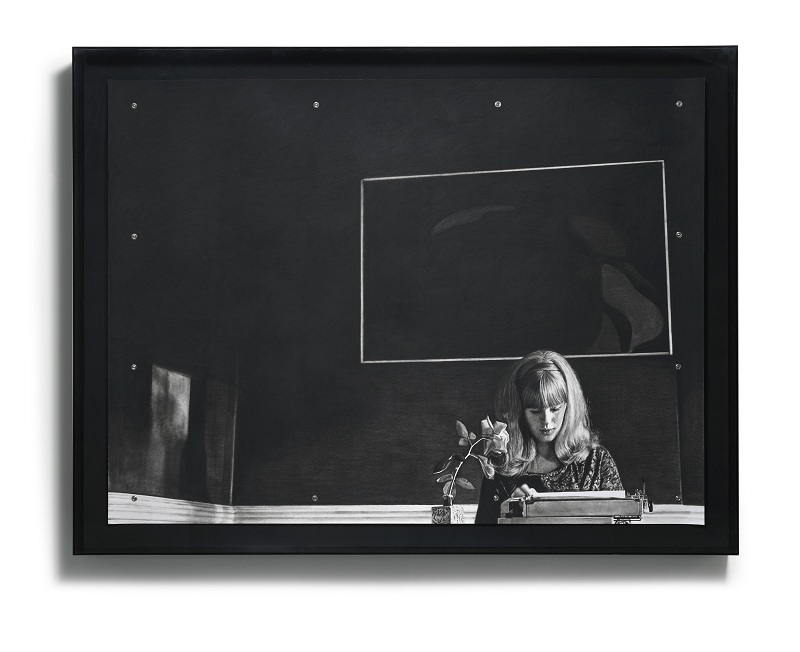 Marianne Faithful was married to John Dunbar, founder of the Indica Gallery, in the early 60’s, before her infamous relationship with Mick Jagger. The image was found by the artist, amongst a collection of negatives, whilst working as assistant to John. In the background is a framed painting given to the couple as a wedding gift. 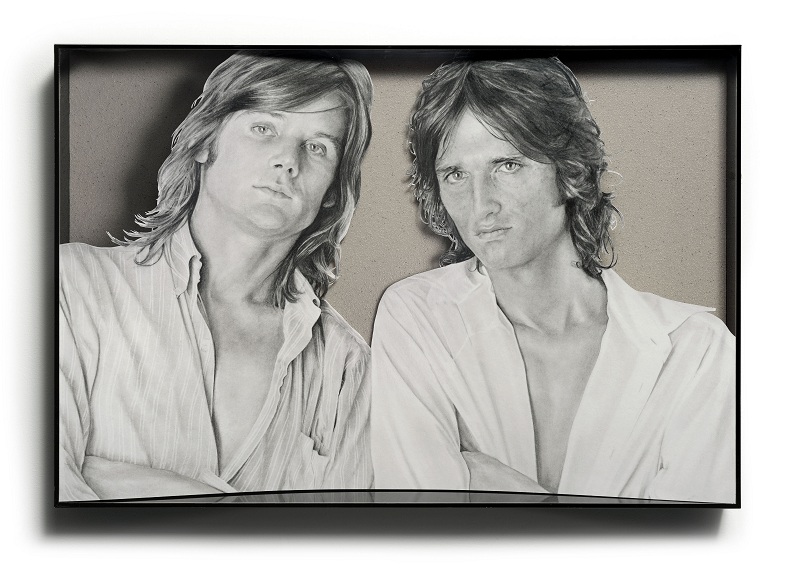 David Courts and Bill Hackett are the designers of the famous Keith Richards skull ring. The photo is part of a series taken by Red Saunders at the height of their acclaimed collaboration in the 1970’s. They dissolved their partnership in 2000 to pursue individual artistic interests. They are still making the ring to order.

This new collection of works comes from photographs of, or taken by, people of particular resonance to the artist. The images are symbolic of 10 years in the artists life, those she has met and who have affected her working practice. The link between all the works is not only the artist as creator but also as archivist and friend to the photographed, or the photographer themselves.

As with all Fowler’s work, this series brings a new angle to iconicity. Here she has used private, sometimes very personal images borrowed from friends, and created drawings that conflate this idea of the personal with that of the iconic. The resultant drawings, whilst maintaining an enigmatic quality lent from their original private nature, also appear to be objects of veneration, much in line with Fowler’s previous work using film stills from early Hollywood cinema to create contemporary reflections on the complex relation between desire and the nature of the iconic.

Fowler has treated each drawing uniquely, with each work being presented differently according to their subject, their composition and/or the nature of the image chosen. The artist has also introduced a new material into this series – vinyl flooring, the non-slip varieties of which provide a subtle sparkle effect when set off with light. Precisely because of the banal functionality of this material, it adds a contradictory sensuality to the works once set within this totally new context. The paper upon which the drawing is done has also been given a new, very sculptural treatment. It being cut, bent and floated to extract the subjects from 2-dimensions, giving them an illusionary quality of real life – actual shadows are cast onto the backgrounds. These are themselves pinned down, or hung from the wall with eyelets, against which the cut-out and floated subjects are freed to challenge the viewers perception with their contradictory presence – appearing at once as naturalistic figure and drawn image.

Q&A with Miguel Laino
All, Q&A