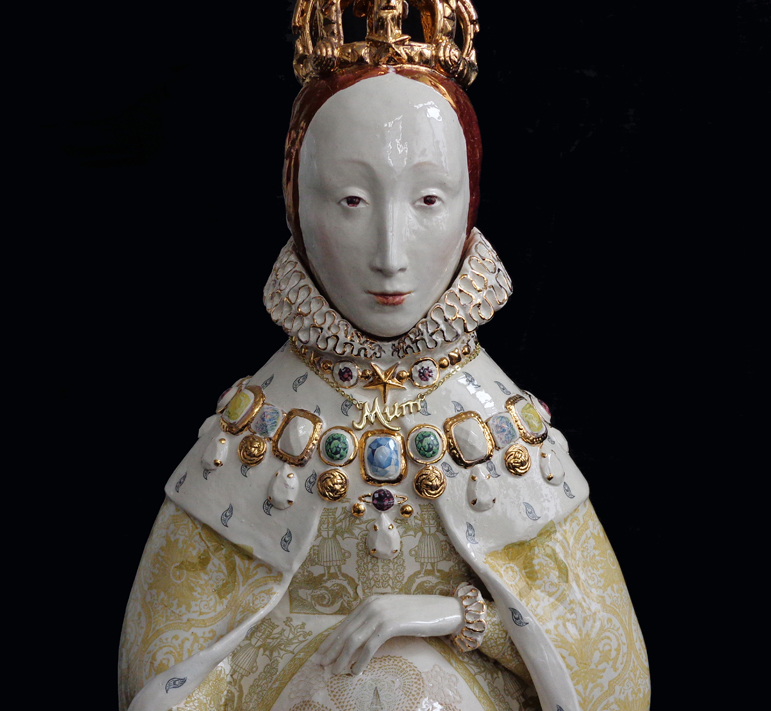 Claire Partington is a ceramic artist based in London. She graduated from Central Saint Martins and has shown work at the James Freeman Gallery as well as being selected for the Young Masters Art prize 2012 at the Cynthia Corbett Gallery.

How did your time working in museums help you to develop your practice?

Working anywhere for a long time gives you a work ethic. Working in museums specifically, helped to round my Art Historical Knowledge, but it also allowed me to actually see the objects I’d previously only seen in books and see the imperfections and bodges up close and realise that my ability as a maker was worth pursuing.
It also gave me unrestricted exposure to exhibitions, both seen from the artist and organisers viewpoint. Managing projects in that environment has helped enormously with my scheduling and figuring how much work I can actually take on.

Your work feels quite timeless, as if I might see a piece in an old stately home, commissioned by an eccentric patron, a few hundred years ago. Do you see this as a characteristic of work?

The aesthetic of my work is derived from various Art Historical Styles and the blurring between styles and bodging that has gone on throughout the history of Decorative Arts. Obviously as I’m making large figurative ceramics, you might find a pair of Meissen figures in a stately home.
A while ago I saw a book about dictators homes, which featured great pictures of these completely over the top gilded interiors, in line with Palais de Versailles, but totally grasping “Classical” decorative arts from all over the place to exert power and knowledge. I’ve got a hunch that’s the interior my work would sit well in – That does actually sound like a stately home doesn’t it. 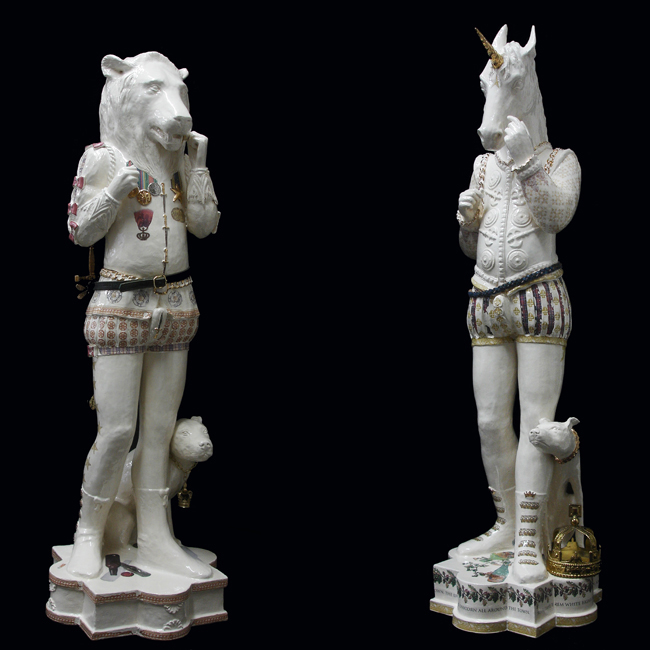 Do your figures inhabit a world or mythology of their own?

The figures are often illustrations of existing stories, altered in subsequent retellings or my own mistake or reinterpretation of history. Beyond them being illustrative and maybe aping a historical dress style, I don’t think they in habit a world other than our contemporary one.

Do you have stories for these characters playing in your head when making them?

Not consciously. I have an idea of how I’d like the characters to look and what accessories and references I’d like to include, but the story (or that type of character), already exists and I’m just adding another mutation to it.

No, there are so many different ways of approaching and presenting Art and thankfully there are no restrictions. It’s totally subjective, Art either appeals to you or doesn’t. Someone can present an amazing conceptual statement and someone else can commission a craft maker to realise their vision. It doesn’t detract from the finished work or the impact on the viewer. They either respond to it or they don’t. 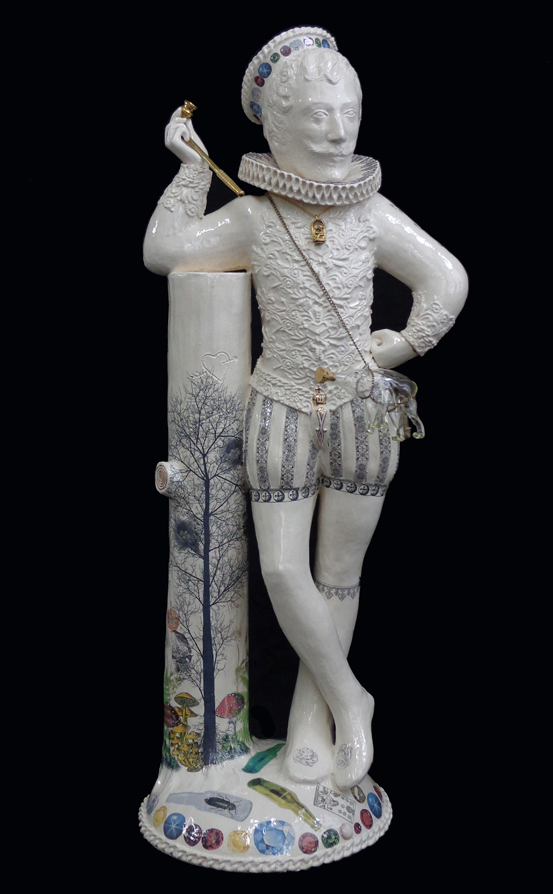 I think it’s equally important now. I would assume it’s similar to being a narrative artist in any media. However, I like the limitations of Ceramics and the historical connotations.
Initially I took up ceramics as something I enjoy, not thinking about any subject, but it seems to have spiralled into something else – I still enjoy it.

Do you think there is a certain type of person who collects or is interested in your work?

I don’t know, I hope not. Of the people I’ve met, they seem to be pretty varied.

Are you more inspired by work in museums and galleries or elsewhere?

I’m inspired by all sorts of stuff. I can find inspiration in an “object d’art” in a pound shop or in a certified, authenticated Museum “treasure”.
I think my main inspiration is contemporary culture, as that unavoidably shapes my view of the past and is heavily referenced in my work. There has been so much read into folk and fairy tales, which has been shaped by our contemporary cultural understanding. Also, the way history is written about and taught has changed over the past decades to examine the social nuances from our cultural view and to try to redress the male and colonial histories that dominate. 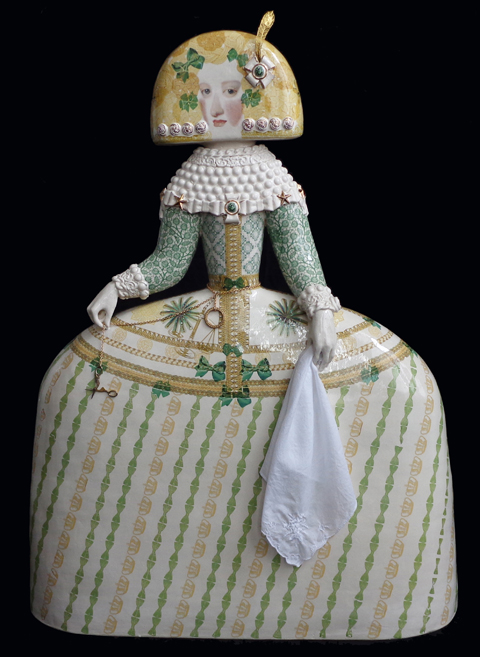 What influence do your children have on your artwork?

They certainly impact on my ability to actually make work. I guess revisiting children’s literature has reminded me of the stories I was fascinated by as a child. But, I think the main impact has been the unavoidable shift of priorities and perspective. I’m making work to suit me and I don’t really mind if it doesn’t fit into a category or appeal to everyone

Your ceramic figures often have two changeable heads – what is the thinking behind this and how important is this feature in your work?

Some of the figures I’ve made are based on transformation tales so the interchangeable heads are vital to those pieces. This comes from toys, both historical and contemporary with their interchangeable parts to transform from one thing to another, but it also comes from the ceramic tradition of figurative bottles.

What kind of artwork would you make if you had a warehouse full of artists working for you?

I don’t know if I’d like the idea of losing control in that way. I am considering making press moulded editions, but that’s still a labour intensive process which would be entirely down to me making a run of four or five pieces.
I know the Meissen Factory has an Artist in Residence Programme with use of their facilities and skilled makers, but I think in my case, producing work in such a setting would inevitably soften and polish the work. It would loose something of it’s impact and imperfections. 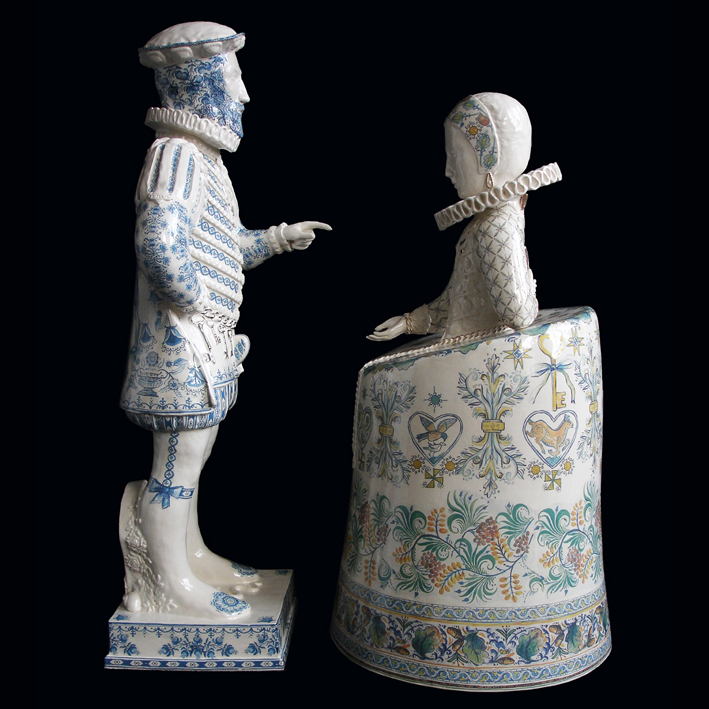 How do you feel your work has changed/improved since your show last year?

I’ve certainly improved technically and the scale of the work is much larger. I moved studios and now have more space and access to a huge kiln, so working for this show has generally been easier and I think that shows in more ambitious pieces..
Of the new work I’ve made, which are based on stories, some are also based on iconic images of historical figures. I’ve made Goldilocks and Melisande, both stories about hair and based their figures on Mariana of Austria and Maria Theresa of Spain as painted by Velázquez. I also have a confrontational Bluebeard and his Wife as a Henrecian man and Tudor lady similar to Henry VIII and Catherine Parr.

The Islands Across the Sea with Claire Partington & Cornelia O’Donovan is on show at the James Freeman Gallery, London from 6 February – 9 March 2013.