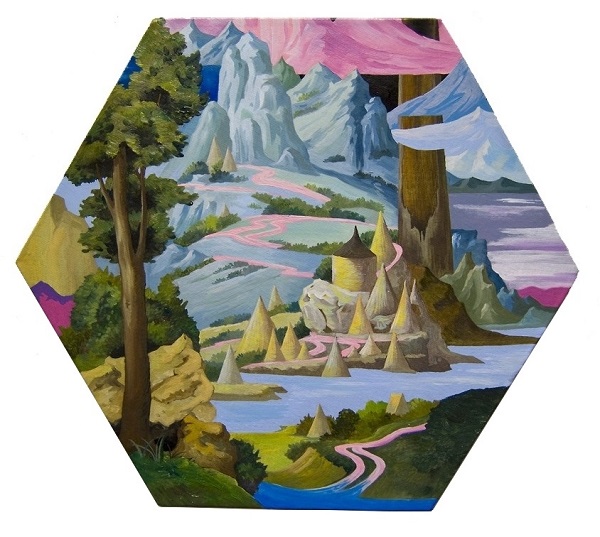 Actually, I’m the first and only artist from my family, both father’s and mother’s side. Though my parents are very supportive of me.

How did art school help, if at all, in the development of your practice?

I graduated Busan Art High school in my hometown, where I earned most of my drawing and painting skills that I use for my current practice. Back then, I didn’t think that I would become an artist but I could improve a standard of draftsmanship under the system of entering Korean art universities. After, I studied at the Seoul National University then at the Central Saint Martins, experiencing the art world bit by bit.

How did you find studying in London?

Although surviving in London was extremely expensive, spending part of my life in London as a student and an artist was certainly a the most valuable thing I’ve ever done. I just had so much fun by visiting all kinds of museums and art galleries in London. Becoming a museum goer has enormously inspired my practice and directly led me to research old western masters’ drawings and paintings. 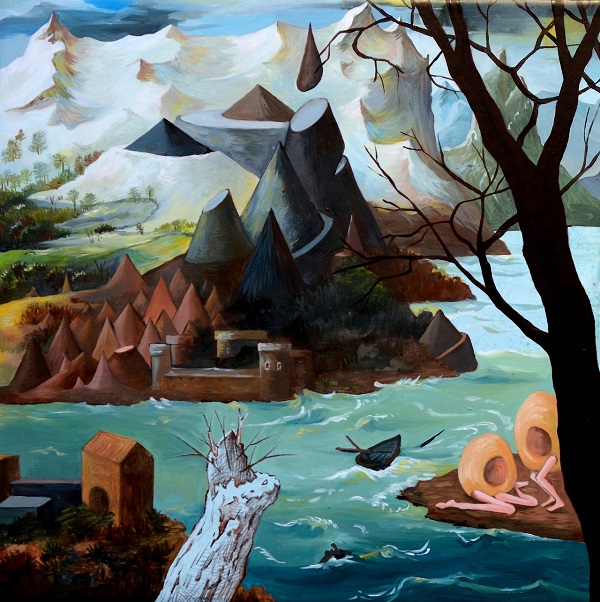 Your work takes inspiration from northern Renaissance art, Bosch and Bruegel in particular. What attracts you these images and style of painting?

When I first saw Bosch’s ‘Garden of Earthly Delight’ in person, the painting just blew my mind. The incredible variations of mutated beings and crazy landscape in the picture somehow made me think of the notion of archetypes such as images about primal human beings, nature, heaven and hell. I found myself creating similar kinds of grotesque and absurd imaginary characters since I was able to draw. I have been always strongly intrigued by one’s imaginary world and enjoyed contemplating the fantasy. For the same reason, I’m also in love with Bruegel’s work. By taking these references into my imaginary world, I see the possibility of finding connections in previous art history with my practice. In that, I’d like to develop a fantasy based surrealistic view of the real world. 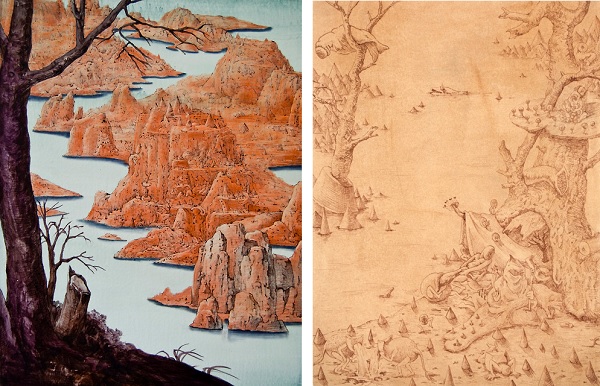 Is important for the viewer to recognise the classical art reference or would you rather the viewer saw the work in its own right?

Either way, it is fine by me. I am more interested how viewers interpret my imagery according to their own cultural or educational background.

Where do you get the ideas for your characters in the drawings?

They mostly come from my doodling. In doodling, I don’t plan ahead what to draw. Thus the drawn figures are created from doodler’s impulse depending on the state of mind and gesture of the hand during the act of drawing. I think in this way I can create characters originating from the unconscious. I also like to get reference from old master’s depiction of heaven and hell both from the West and the East. (eg. Garden of Earthly delight, Korean Buddhist painting) 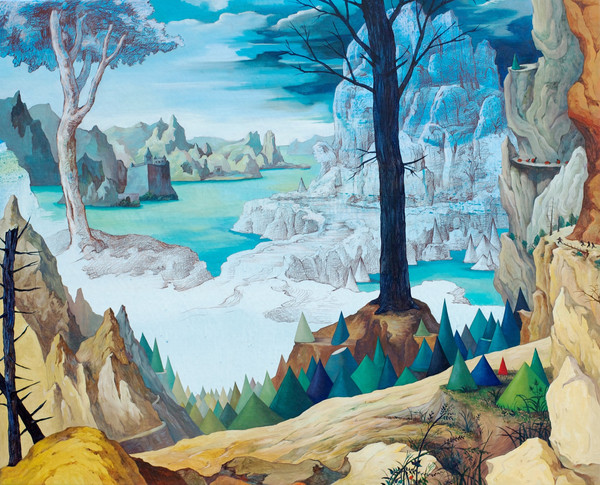 Cones frequent your landscape, what interests you about them?

Well, the cone shape stems from the high school period. I had to adjust myself in order to meet the high expectation for the entrance exam to the art college in Korea. So I had to repetitively draw the same pictures of idealized composition those times. Practicing drawing a perfect shape of a cone was one of drawings early training stages. When I started to make intuitive drawings, cones just naturally followed as my hand goes. Now I regard that cones can be seen as geometrical factor of nature such as mountains or habitats for the creatures in the picture. I particularly like the pointy top of it. I imagine that viewers are sometimes attracted to touch it when these cones timidly defend themselves.

Do you think your style could be adapted to more contemporary imagery?

Since moving back to my hometown, Korea, I feel changes in my practice by the different environment. My landscape represents not only my inner mind and imagination but also the real world surrounding me. When juxtaposing images from these two roots in the one picture, I can establish a distinctive originality as an artist. 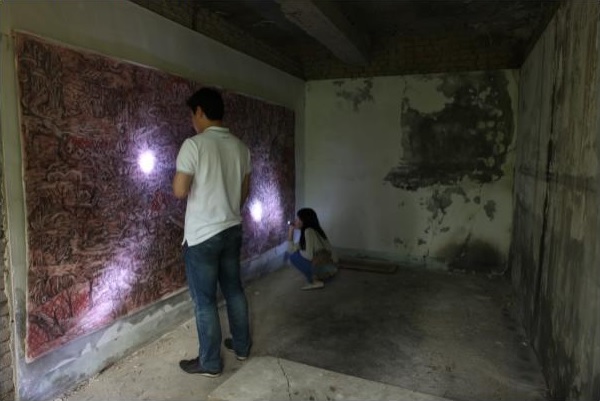 What was the inspiration behind your very long, large scale drawings?

The drawing was produced site-specifically for the group exhibition ‘Black Out’ (featured above) I participated in Seoul, 2012. The site was an abandoned swimming pool in the middle of mountain and the building was demolished completely shortly after the show. The building had unique spookiness and history of industrial period in Korea. Inspired by the site, I wanted to express one’s unconscious state of mind and landscape beyond the sense of time by intuitive drawing in a big scale.

What’s more satisfying, the process or the final product?

For me, the process of making work is more satisfying than the final product. I use the automatic drawing such as doodling as an intuitive way of expressing my inner energy and imagination that cannot be translated by words. I think viewers can find the artist’s spirituality or subconscious through this process, since drawing inevitably carries the artists’ private and intimate moment of creation. 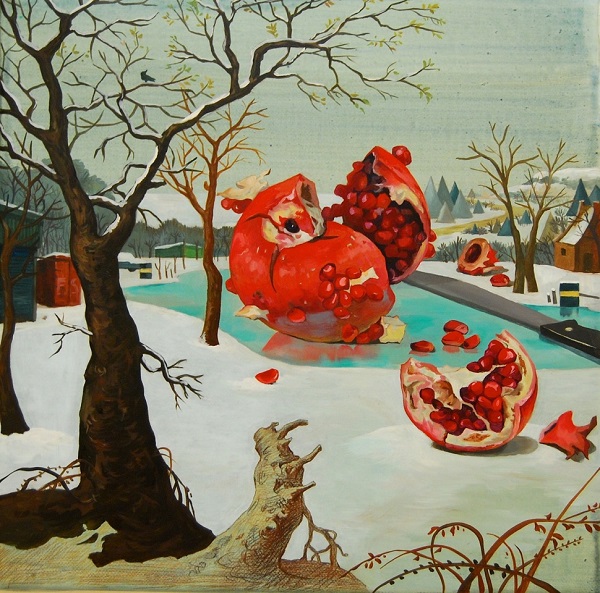 What is the biggest distraction from your studio?

It’s the awful smells from restaurants nearby. My studio is located on ‘the seafood restaurant street’, Jung-ang dong in Busan. Those are delicious thing but it is hard to stand smokes by barbecues. Despite of this, I love working in my current studio.

Why are you asking me about this traumatic situation! I would just immediately run way to save myself…with my laptop. 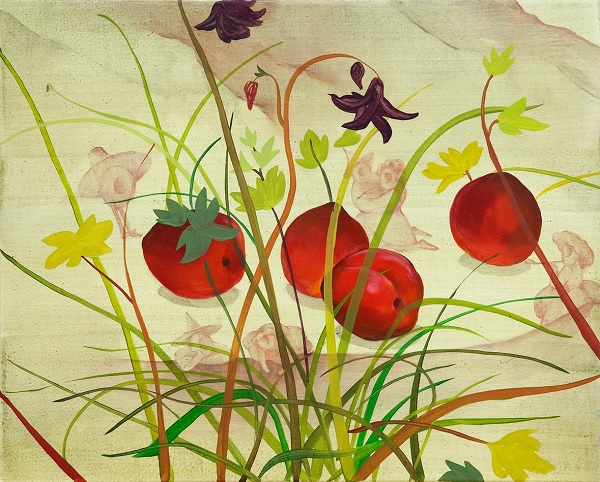 I will expand the materials and techniques I have been using. With homage to the Northern Renaissance art, I’d like to gradually combine elements from my own surroundings in the painting and play with all the visual references I bring.

For me, it is wonderful to think about that all humans can genuinely share primitive images and the fantastic, through the unconscious. I think by sharing this unconscious, one can comprehend others even though an individual’s life and experience is completely different from each other. I would like to continue my practice in order to achieve my goal; evoking the sense of fantasy, which is naturally inherent in human beings through a visual medium.

If time and money was not an issue, what kind of artwork would you like to make?

I would like to purchase a small house in a green field or by the seaside and fill its interior with my drawing, then invite people to experience the work!

Hyunjeong Lim’s drawings are currently on show in the Art Circus’ first curated show ‘The Last Man’ on show at the James Freeman Gallery London. On show until 2nd August.