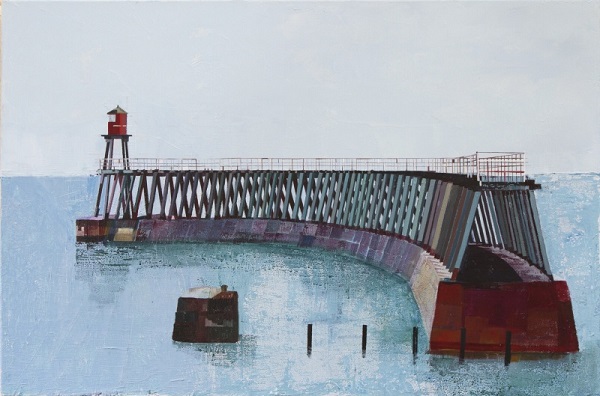 My paintings are essentially representational but I also want them to take the viewer further. I want the paintings to present more than an image of a familiar place or object but also to take you to a time you once knew or feel reminded of. I like the paintings to create a narrative. They are all about man made structures and mans interaction with them but I remove all human representations to allow the viewer to find their own narrative.

This is the East arm of the entrance to Whitby harbour (featured above) I have a particular soft spot for this painting as I live just down the road from Whitby. It was also important to paint it at this time because its sister pier (west pier) had had its connecting bridge closed and the council were not planning to repair it. This would have meant that both piers would be completely unaccessable. Fortunately there was a successful local campaign and it was repaired. This painting therefore emphasises the lonely detached nature of the East pier with its boney remnants of what once linked it to the land. It now looks as though it might bob off into the North sea. 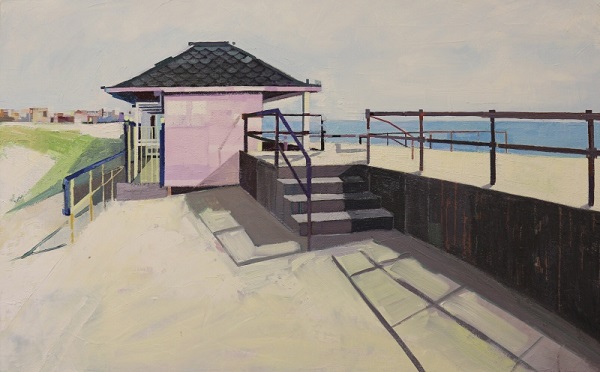 This painting of beach huts in Skegness for me has successfully done this. The whole beach along this stretch of the East coast is purely devoted to fun, holidays and family. It is just along from the site of the old Butlins holiday camp. I wanted the feeling of slight excitement you get when you are about to climb the steps and the whole marvelous beach will be revealed and waiting for you to spend the day. 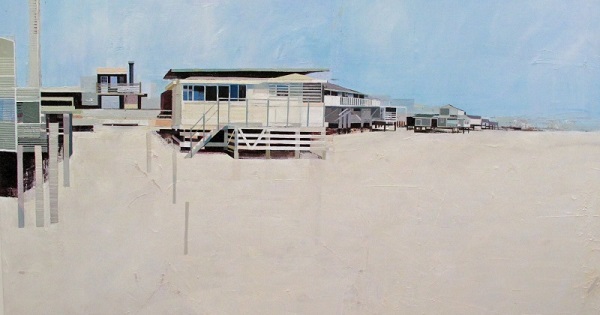 This painting is from an earlier series taken from the beaches North of San Francisco Bay. This is where I first became fascinated by beach structures and environments. I had been exploring the city and collecting visual information at various locations but kept coming back to the shore line. Stinson Beach (featured above) in the area just to the North of the Golden Gate bridge and was famous in its day as a hippy hang out. These houses were erected from old huts and recycled cabins. These days they have become very desirable real estate. I was interested in their eclectic mix of recycled and new. 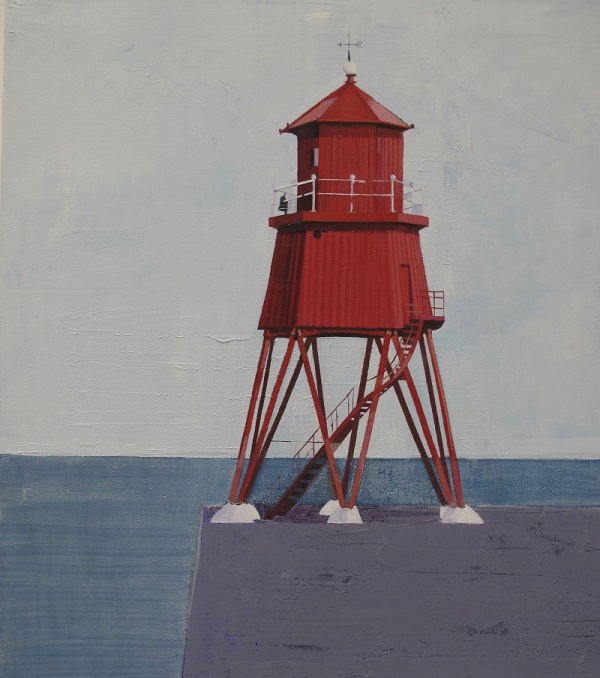 One of the main reveals of my tour is the rapid change you get moving down the coast from one area to another. A half mile from one council or borough to the next can change the being of the place. I came to South Shields after a few days spent in Northumberland on Holy Island and Blyth where the places have had to reinvent themselves after years and years of industrial decline. South Shields is on the south bank of the river Tyne and I spotted this light house through some hoardings on the North side of the river. I then spent a day trying to navigate my way to it via the rebuilding of the Tyne tunnel. It was a real treat to get there and find myself on a beautiful white sandy beach with this little gem of a light house just sitting on the end of the groin. It is locally known as ‘the groin’.

Sometimes I know there is no more to be done than to just represent the subject. It is so complete an object I felt it needed to be painted almost as is. I have only emphasised its vunrability stuck out there on its little strip of land fighting all that the North Sea can throw at it. It had recently had a lovely new coat of paint and it was absolutely glowing.