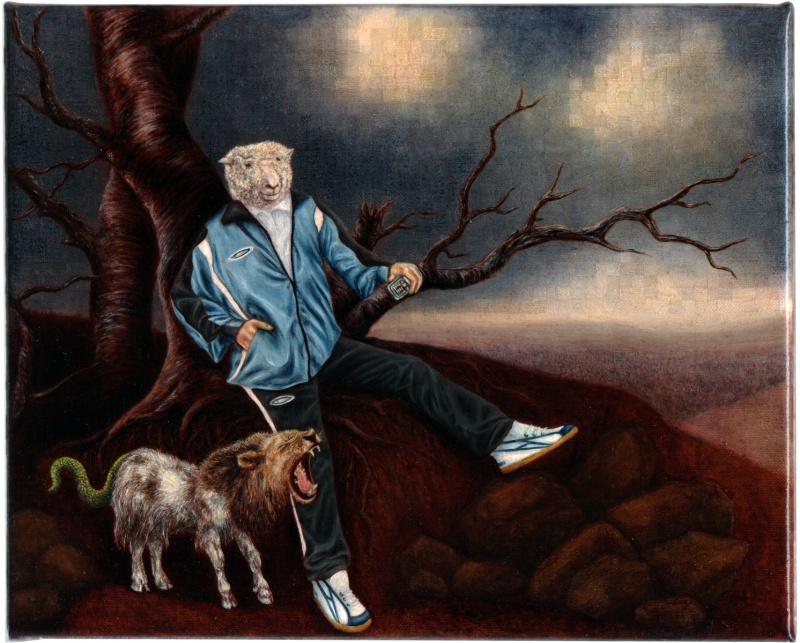 Lex Thomas, born in 1972, gained a BA degree in Social Science at the University of Greenwich before studying Fine Art for three years at the University of the West of England followed by a Postgraduate Diploma at Chelsea Collage of Art. She has been shortlisted for the Lynn Painter-Stainers Prize, the Rising Stars Prize and won third place at the Woolgather Art Prize.

I’m open to a multidisciplinary approach as there are various ways to explore the same themes, but paint is, for me, an endlessly fascinating medium. I find the glossy buttery substance of paint very beguiling and the origin of pigments and the alchemical recipes and processes involved a kind of wonder. I like getting my hands dirty; grinding resin, making glaze. But ideally I’m interested in a marriage of ideas and process. I find it interesting to draw attention to both the painting as representation as well as its physicality and the act of painting. These ideas are integral to my work. I like the Bacon quote: ‘the paint is the image and the image is the paint’. You can’t avoid acknowledging the history of painting, whether it’s embedded in the work or tackled head on. It’s another of its appealing complexities. 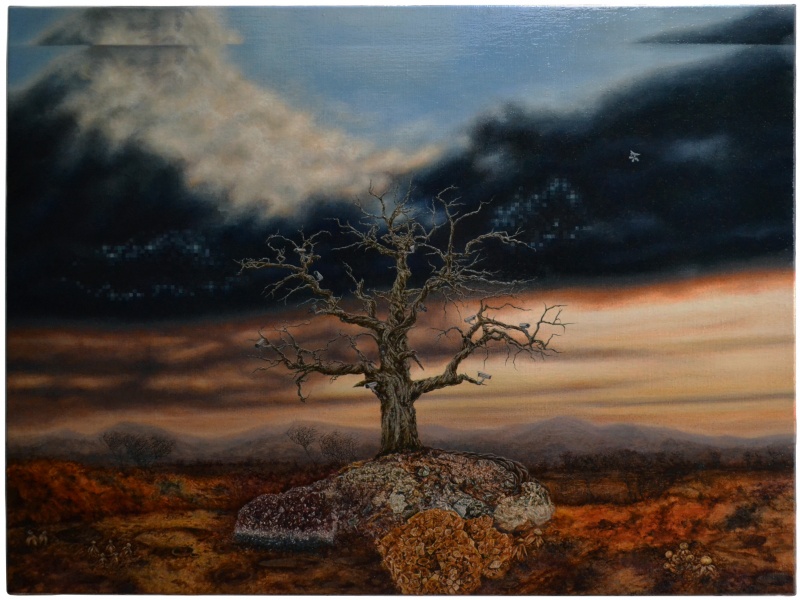 Are you more inspired in museums and galleries or elsewhere?

I vividly recall seeing Rembrandt’s self-portraits and Brueghel’s landscapes on holiday as a kid and they had a massive impact on me. Both the tradition of painting and the current conversation is fascinating.

Reading and literature is a great source of inspiration – possibly my main source of inspiration. It’s hard to say. I have a nerdish enjoyment of research of all kinds. I think as an artist one is constantly absorbing ideas from our surroundings – it’s the old sponge cliché. Inspirational sources can be so diverse, from retail parks or song lyrics to philosophy or science fiction. Computer games… reportage… futurology… the impossible diversity and strangeness of the natural world… the stuff of paint itself… it goes on… 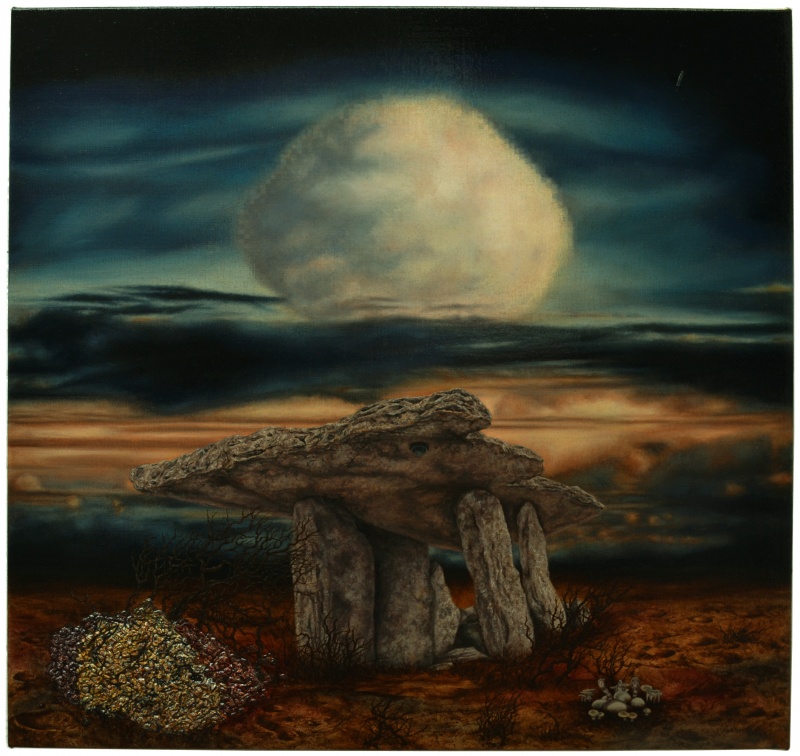 How important is the title of a piece?

Sometimes the title comes before the work and acts a germ for a painting. I read Beckett’s ‘End Game’, for example, and that developed into a painting. The title for my recent series of work and exhibition ‘Of Truth of Clouds’ comes from reading some of Ruskin’s writings. I enjoy the resonance of words and image. 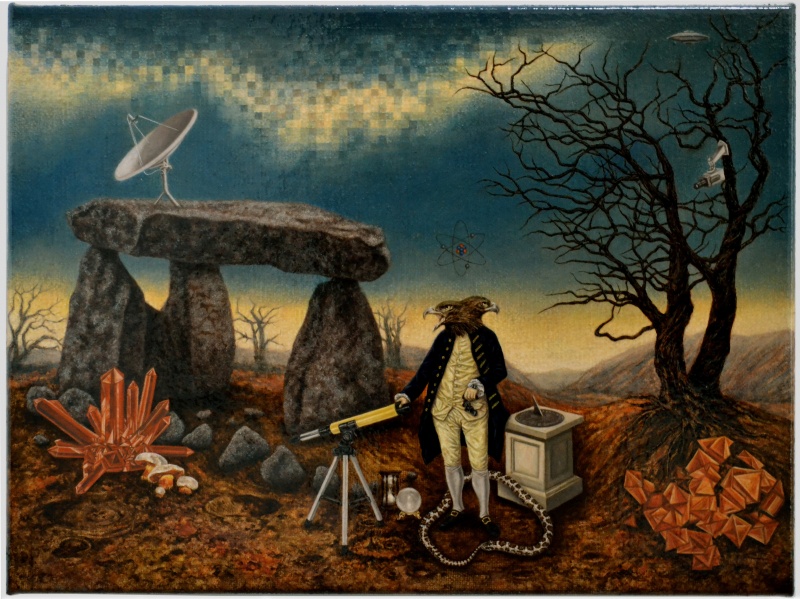 The skies in your paintings are often pixelated, what is the thinking behind this?

I see this as following on from earlier artists’ use of the dot matrix as a way of dealing with the mechanised creation of imagery. I’m interested in the construction of the image and alluding to its own fabrication. In painting the digital grid I am emulating a machine – I’m thinking about our nature in relation to technology. It’s also an exploration into simulacra and authenticity. Using an antiquated medium in a digital age and making, by hand, miniature facsimiles of earlier paintings is in part a social critique. I’m interested in our immersion in digital culture and the hyperreality of our

times where things from virtual reality can spill over into real life, like Second Life turning real world profits.

More recently I’ve been depicting the skies as misregistered or a combination of both pixilation and this glitch. I am using this trompe l’oeil misalignment to disrupt representation and to emphasise the act of painting. 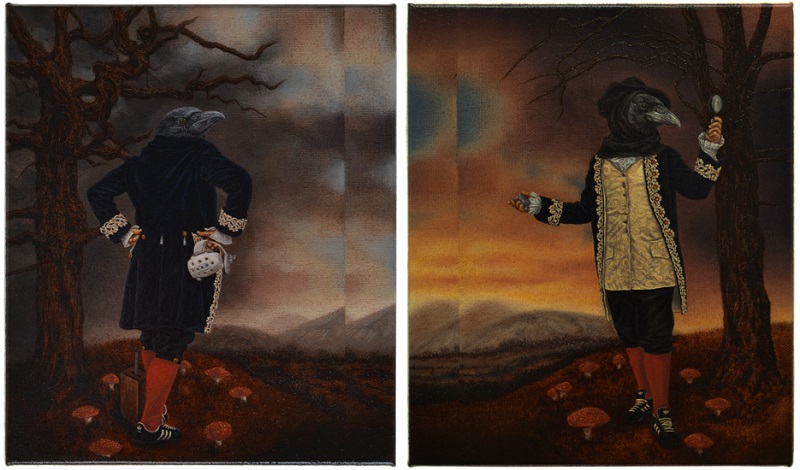 All your figures have animal heads. Would you ever paint a human head amongst the crowd?

Mythologies and anthropomorphism continue to interest me. I’ve just finished a couple of paintings that use figures based on the Mediaeval pseudo–scientific plague doctors who with quasi-religious quackery roamed the country spreading the plague while ostensibly trying to eradicate it. I love the paradox. One theory was that birds spread the plague, another that it was carried in noxious smells. The doctors wore these beak-like masks which contained medicinal herbs thought be effective at protecting the wearer. They resembled birds and for me this has developed in them being portrayed as Gothic crows where they can exist collectively as a murder.

Recently, though, I’ve been working on some sketches exploring the use of tronies in future work. Where the identity of the human figure isn’t important, it’s about the actions and gestures or the character assumed. 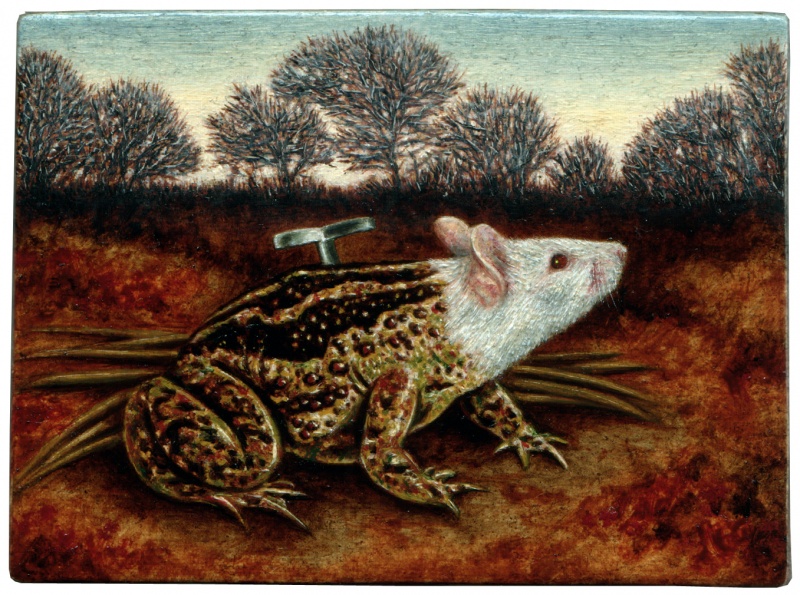 Do you think of stories behind the characters as you’re painting them?

The narratives in my paintings occupy my mind while creating the work. I try to write as much of this down as I can as looking back on work sometimes I can’t remember the half of it! Thought isn’t linear though so some things remain a mystery even to me. But as a species our inherent brain architecture is such that it strives to find meaning – this is one of the things my work is about. I like to explore imaginative truths and search for essential truths. But, of course, the meaning obviously exists in the mind of the viewer…

I heard the quote somewhere that ‘the best storytellers are profound liars’. I like this in terms of artifice and illusion and how that echoes painting. 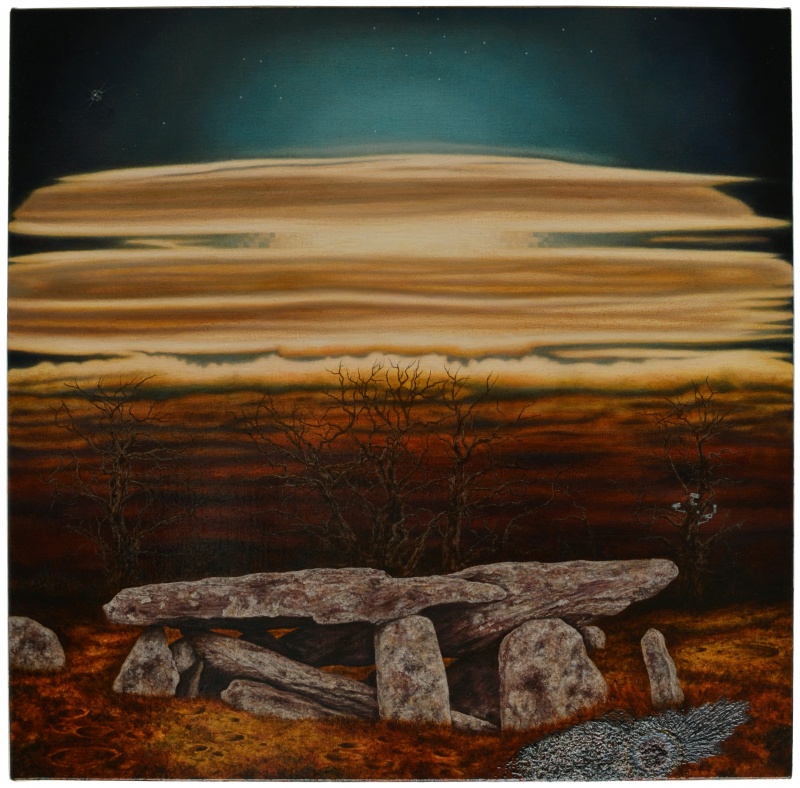 Your paintings don’t show any signs of buildings or architecture. Do they not feature in your dystopian future?

Since my residency in Ireland I started painting Iron Age Dolmens in to my landscapes. On the Skellig islands there were these monastic beehive dwellings perfectly intact after 1400 years. I stumbled across so many sacred sites and stone circles there and some time ago I lived in what was the druidic Vale of Avalon. Britain is so rich with these so-called ‘Pre-historic’ megalithic burial chambers and portal tombs; they’ve been a real inspiration to me.

I’ve also been concentrating on crystalline structures, wondering about the architecture of them and their properties in terms of time. 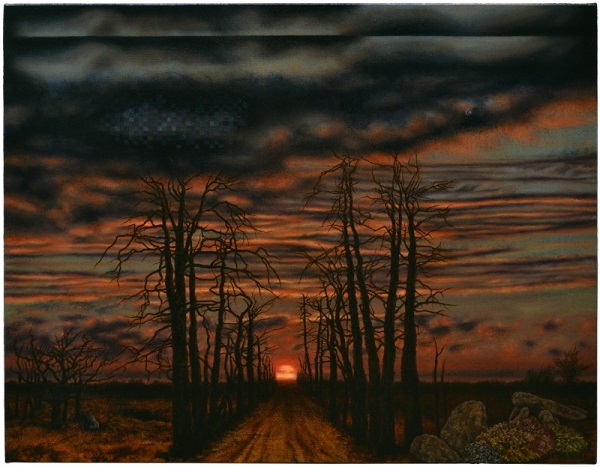 How do you see your work developing?

I tend to work in series and these lines of enquiry seem to have a natural evolution. Threads unravel and get reknotted. The body of work I am currently involved in will be for a solo show in April at the South Hill Park Arts Centre. Meanwhile, I’m sketching and making notes for my next phase of work…

Lex’s new paintings are on show in ‘Of Truth Of Clouds’ from 20 April – 16 June at the South Hill Park Arts Centre, Bracknell.

Melodie Cook at the Mall Galleries
‘The Royal Society of Portrait Painters’
All, Artist Show