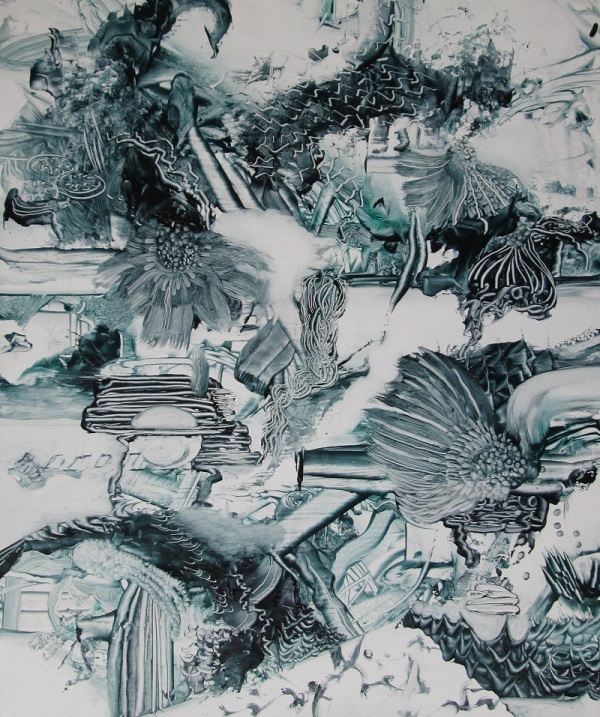 Irene Godfrey was born in Co. Durham, near Blanchland, in 1955. She trained at the Cass School of Art, London Metropolitan University (BA Fine Art, 2012). Upon graduation she won awards in both the Owen Rowley Prize and the Annual University Vice Chancellor’s Purchase Prize.

My father was a mining engineer. He used his creativity in problem solving.

You hold a Graduate Certificate in Ecology and Environment, how does this influence your painting?

The knowledge gained from my environmental studies has made me more aware of the interconnectedness of all things – the idea that symbiotic relationships between organisms are a primary force in evolution and the maintenance of ecosystems. I try to capture this in my paintings.

How did your practice change during art school and does it help being a mature student?

Before art school my work was more representational. I experimented with the styles of others. At art school I discovered an individual way of working that was encouraged. Being a mature student brings with it more self-expectation, but also hopefully more layers of understanding to draw on and express within the work. 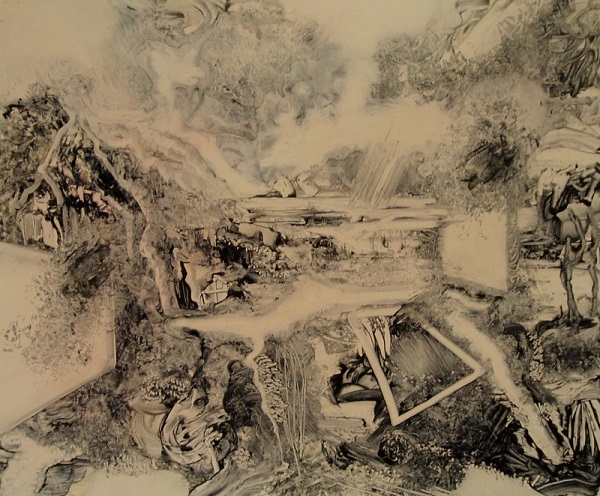 What does the chiaroscuro technique bring to your work? Would more colours in the work, ruin the work?

The chiaroscuro technique allows for ambiguity of interpretation by the viewer. It allows me to play with depth of field, scale and perceived imagery. Recognisable details might morph into something else on subsequent viewings and so keep the observer engaged. The introduction of more colours into the work might limit the brain to seeing things in one way.

How do you play between ‘highly representational’ and the ‘abstract and fanciful’?

I love playing with this juxtaposition to subvert the viewer’s expectation. I might start drawing from life, a landscape for instance or else use an old master for inspiration. I then start to break this down or embellish it as the mark-making suggests different sub plots within the work. I repeat these processes as the work takes its own path. At other times starting with a midtone wash of pigment I launch straight into the abstract and fanciful from which more representational details seem to suggest themselves and emerge. 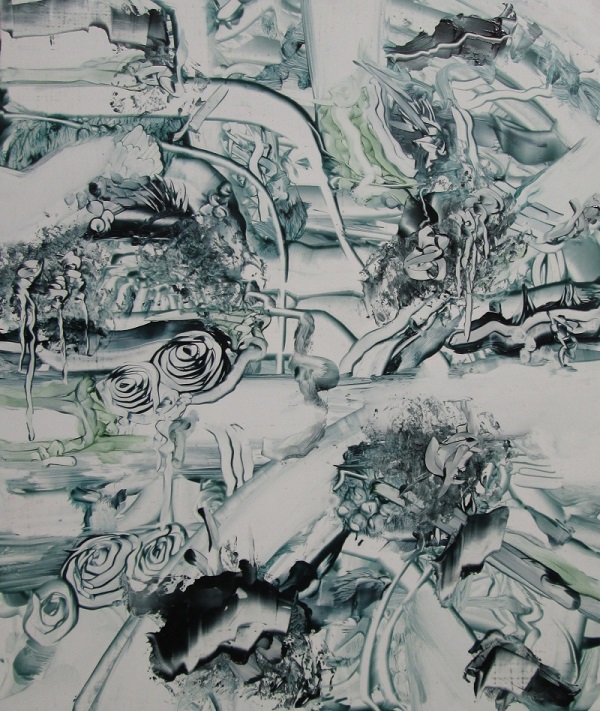 ‘’The artist employs the influence of painters from the 16th to the 18th centuries to express her ideas.’’ Is it important for the viewer to understand the references in your work?

No. I hope the work can be appreciated on several levels. However understanding the references might allow the viewer to muse on the world as it was then and appreciate how this parallels the way we live now. For instance the colours and style I draw from 18th century English transfer-ware pottery (itself influenced by painting) might be seen to allude to comparisons between 17th century merchants and today’s globalised culture.

How would you like viewers to interact with your work?

In any way they can. Some bring to the work resonances not intended by me for example from science fiction or animation. I would like the viewer to be initially drawn into the work by its form and aesthetic qualities, then to be disquieted by elements that threaten to disrupt the painting’s stability. My choice of colour and title might further direct the viewer to historical references and issues at stake. 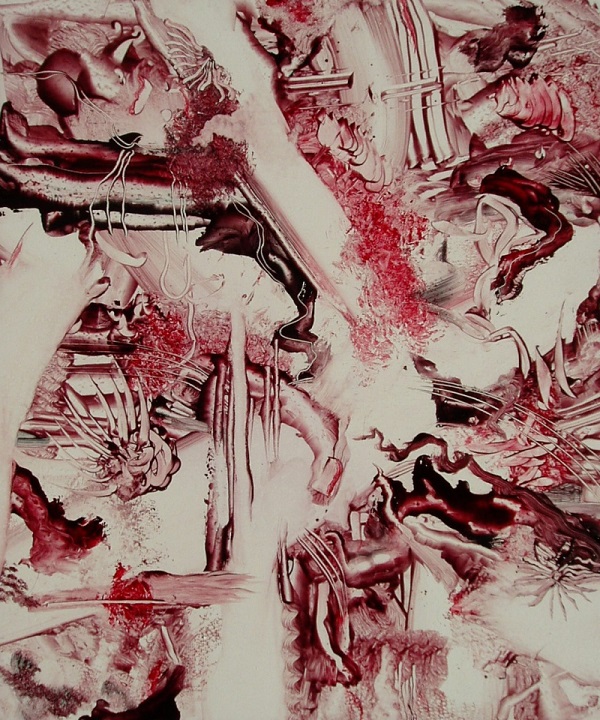 On your website it says about your work ‘’the resulting melancholy alludes to the ecological decay present in today’s unraveling environment. Godfrey is investigating the interconnectedness of our globalised world’’. Could you talk a bit more about these ideas?

Melancholy can be described as the mourning of what we have before it is taken from us. The more an environment is fragmented the more quickly these fragments will die. Globalisation with its links to the growth of commerce on a grand scale fragments and negatively impacts on the earth’s limited resources. I am investigating the cause and effect of this fragmentation on the world including humankind. Every species in an ecosystem contributes to the whole so that the loss of even a seemingly insignificant creature can have a great effect. I am investigating this idea of symbiosis as a primary force in evolution. This is in contrast to the Darwinian idea of the survival of the fittest, which emerged with and served to reinforce the supposed natural state of market forces. 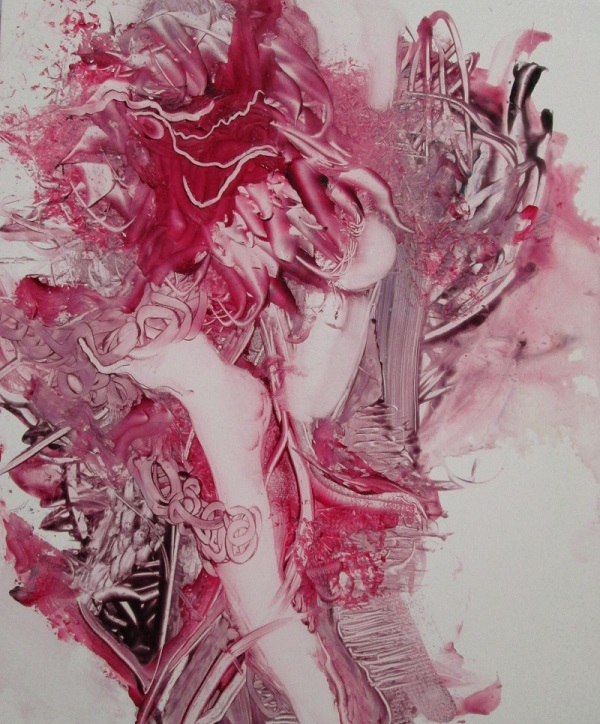 If time and money were not an issue, what scale and medium would you use and what would you make?

I would like to experiment with other naturally smooth surfaces such as metal and Perspex using oil paints made from ground semi-precious stones. I might try painting on a much bigger scale but small suits me. Both the maker and the viewer can interact with small work in a more intimate way. I want to direct people to the depth of the here and now.

The view and self doubt.

I would like them to become more multi-layered and engaging. I would like to rise to the challenge of introducing more colour combinations without the loss of ambiguity. I am also drawn to the Northern European tradition of egg tempera on panel, but this would involve working in a very different way.