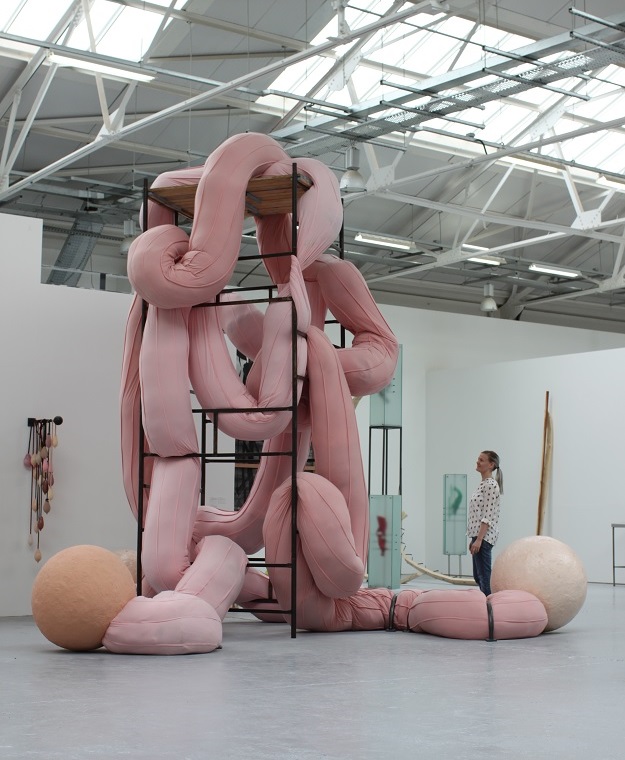 How did you get the idea for the piece?

Much of my work investigates the power of the fetish, the anthropomorphic and hints at organic and bodily properties. I find that where the work plays with opposites lies the tension and often juxtapose softer materials against harder surfaces, always considering the points of contact where two surfaces touch. Where welded steel structures add a functional rawness and nakedness that heightens the softer cosmetic palette of pinks, ivories, and flesh tones. A kind of dressed and undressed. 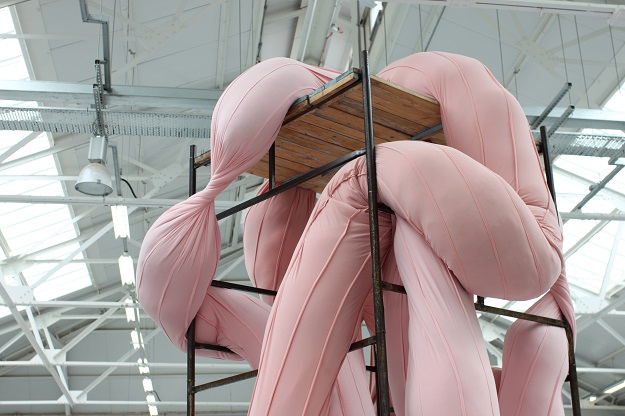 I worked as a builder for a number of years and this is where I got the scaffolding tower. I think this is also where my relationship to making large-scale work came from. Working on building sites often means you are making things that are greater than your own body size and I enjoyed this relationship, not to mention the constant need to prove myself as a woman working in an all male environment surrounded by gender politics. This gradually filtered into my own artwork. It was one of the first scaffolding towers I worked on and I fell in love with its simple functional structure. A lot of the practical readymade objects I use come from things I found in the building trade or are items I buy at auction. If not they are steel structures that I purpose design and weld together, like the steel cage-like hoop structures at the base of the pink forms that clamp them to the floor. I often think of these objects as being the ‘male part’ of the sculpture, the skeleton and the softer hand-stitched fabric pieces as being the ‘female part’, the soft body, the flesh. More often than not, the ‘female part’ uses the readymade or the steel structure as a plinth, a shrine, a pedestal or a throne. They consume the male like a black widow spider or poison ivy sprawling across a building. 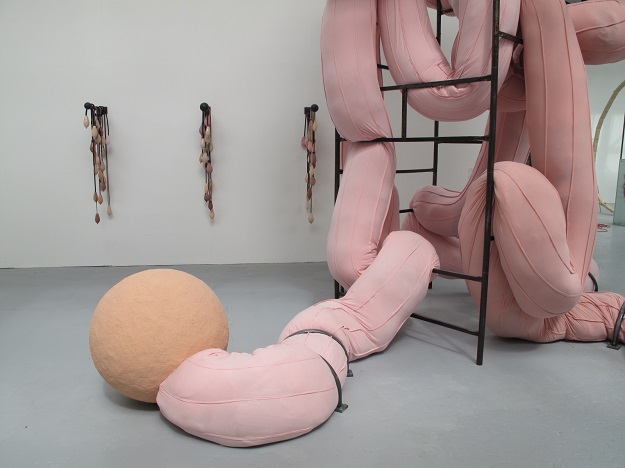 How does the work fit in with your general practice?

Much of my work flirts with ideas of fertility and fecundity. I have a sustained fascination with the double-ended form. There are often two-parts attached, connected, linked, between cells, or a thing said again in my work. Perhaps I am attracted to its repetition, the suggestion of genetics, as if it has mated with itself and created another. I think the twinning or doubling of forms amplifies the transgressive symmetry that alludes to the body. There are undercurrents in the work that create uncertainty. Beneath the veneer there is a ritualistic disembowelling that is sacrificial and almost cannibalistic, raising the questions of which part is the predator and which is the prey? Maybe the pink forms are the scaffolding’s insides ripped out? They undulate in the manner of intestines; they are umbilical, limb-like, sensitive organs, connective tissue, yet cartoon like. And although my work never directly references the body, it often hints at bodily properties. Particularly through the use of colour, often using colour as a character defining quality.

Depending on the presence a sculpture emits, it can often take on a gender, they become ‘beings’, not always human, not always animal but a personified living thing nonetheless with a character of its own. In the case of ‘Ingesting the Devoured’ the character is decidedly female. I wanted the female character in the artwork to be the authority figure, a kind of female weaponry, taking the idea of the woman and empowering myself and the female form by celebrating all that is woman. I have always been interested in ideas around gender politics, which perhaps comes from working in an all-male workforce, or being the eldest of a family of 3 girls with a Dad that desperately wanted a boy. Perhaps this gave me a bit of a complex, yet all the women in my family, Mother, Sisters and Grandmothers are incredibly strong empowering women. Very much people I look up to. I nearly titled the piece ‘The Phallic Mother’.

Where the work plays with opposites lies the tension: 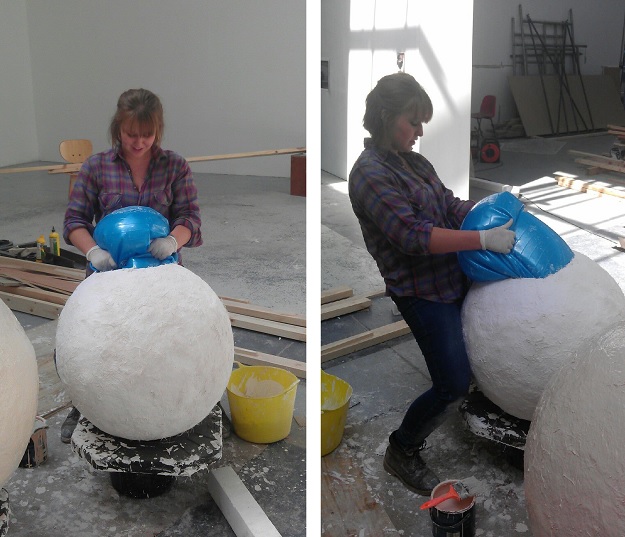 How did you go about making it and what might you change?

The hardest part of the making process was physically getting the pink beast of a form to the top of the scaffolding tower! I used a genie lift but as the pink forms rose upwards with the mechanical lift, the stuffing inside the sausage fell downwards because of the sheer weight of it. I had to get a team of 8 people to help me lift the form through the tight spaces of the scaffolding. We literally had to punch the form through the structure. But hopefully that meant that the bends and the bulges of the stuffed forms felt more active and bodily. 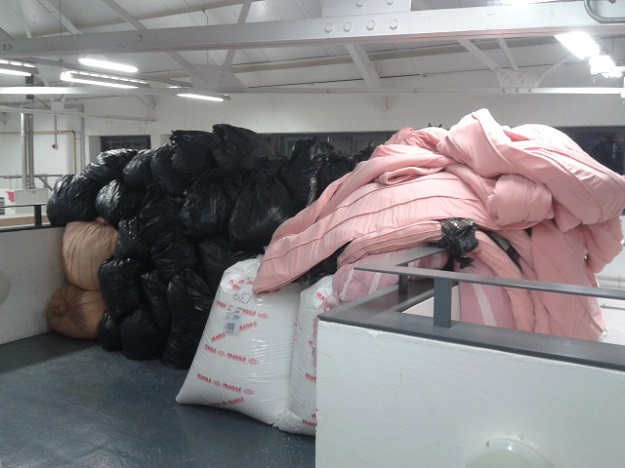 On a purely practical level, if I could make it again I would go over the stitching on the pink ribbing a second time. You can see where the weight of itself has broken the stitching as it twists through the scaffolding, bursting at the seams as it were. But doing all the stitching to make the decorative ribbing meant that I sewed over 360 metres of fabric for days on end so the idea of doubling that for strength is a bit painful. But then perhaps it adds to the absurdity of the piece when you think of the energy that went into making and erecting it. 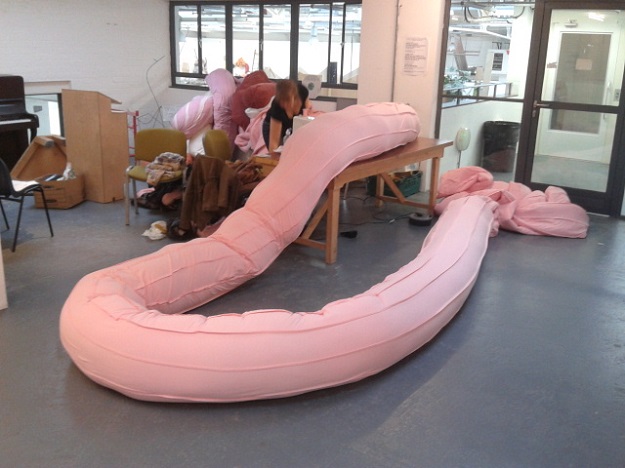 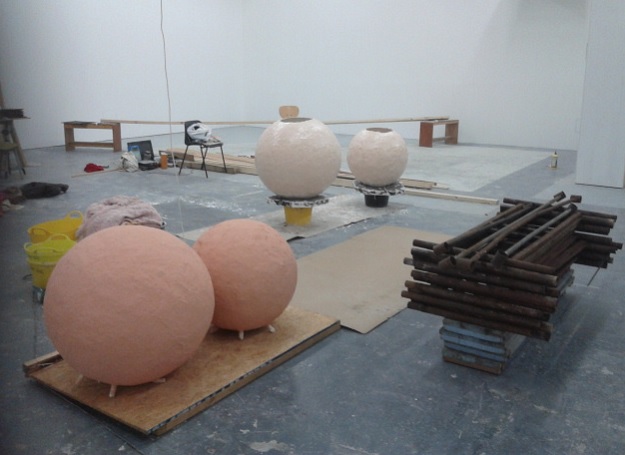 How did you decide how to position and site the sculpture?

I am interested in the immediate encounter we have with objects both haptically and spatially, what we project onto an inanimate object, its own material ontology and the sense of presence it has in the space. I therefore knew that whatever I made for this particular exhibition had to somehow contend with the vast high ceilinged architecture of the space. I wanted the artwork to feel overwhelming in comparison to the viewer’s body in volume and height but to still consider how the viewer would encounter and engage with the work on a more intimate material level. I enjoy the little details that influence how we experience an artwork, making the viewer inspect the work more closely, such as the hairy fibreglass texture on the ridiculously oversized flesh coloured balls that anchor the 2 pink sausage forms to the floor. Each ball is a slightly different size. 2 have a gloss surface and 2 are matt, and I used 2 different shades of flesh colours to disturb the regularity of the work. The two 20 metre long pink sausage forms are also slightly different shades of pink and are different textures of fabric, and each one has been stitched down the length of it to add a decorative ribbing around the entire form. When making this work I was conscious of wanting the work to have a kind of body heat about it. To make a flatter structure that felt overweight, fuller and more powerful. Perhaps to suggest a living thing that had had its way with the structure. 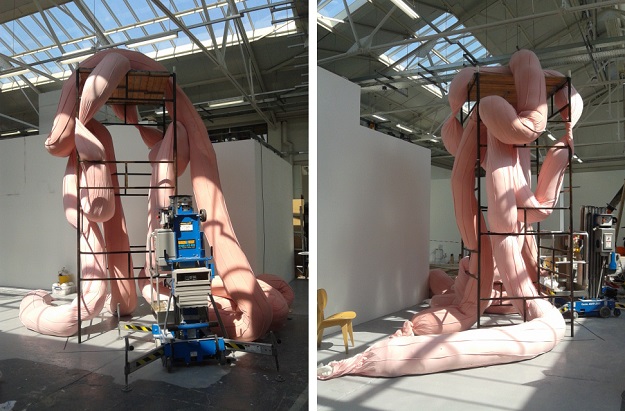 I knew that the placement of the pink soft pliable masses would be the making or breaking point of the work and often consider siting the work as the final act of making. I wanted to consider how viewers would navigate themselves around the work. I hoped to involve the viewer spatially with the excess spillage on the floor of the flopped pink forms and anchored balls getting in the way of the viewer walking comfortably around the work. I chose to place the work uncomfortably close to the wall to give a cramped, squished, suffocated, compressed feel. This also meant that the sculpture was close to the viewing balcony, giving the viewer an entirely different aerial viewpoint of the sculpture where you can see the nice moment where the 2 pink forms overlap and cross over each other at the top of the scaffolding tower as well as the twists and bends as the pink growths coil themselves around the shiny steel bars of the scaffolding. So in that respect, much of the way the work was sited and positioned had a lot do with questioning how the viewer would experience the sculpture. 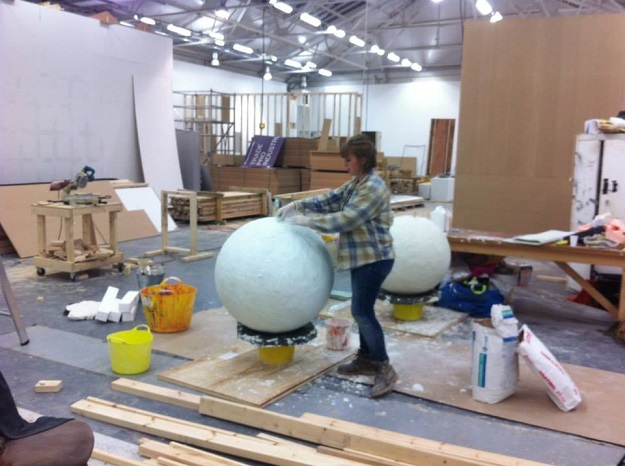 What problems did you have when making the piece?

Problems I had with making the piece were to do with the sheer size and scale of the sculpture, and in particular the volume of stuffing needed to stuff the two 20 metre long pink sausages. I began collecting unwanted bags of shredded paper that I saw left out on the street. I would take them back to my house late at night before the bin men got to them and transport them one by one on London buses to my studio as I continued to make the work. It’s the practical logistics of making a work that become difficult. Like where to source the material? How to fund it? How to get it from the shop, to the studio, to the gallery and even how to dismantle it? The biggest problem was where to store the 80 bags of shredded paper needed to stuff the artwork. This resulted in me piling bags of stuffing in corridors and in any other available spaces I could find until the piece was ready to be installed. These crowded spaces became artworks in themselves and fed into inspiration for the making of the next work. I also recycled many old fabric sculptures to stuff this sculpture. This is partly where the title for the work came from, as I wanted it to feel like an all-consuming devouring artwork that ate the scaffolding tower as well as itself, and by using old artworks to stuff this piece it was effectively consuming or ingesting what had already been made, my old artworks, what had already been devoured. 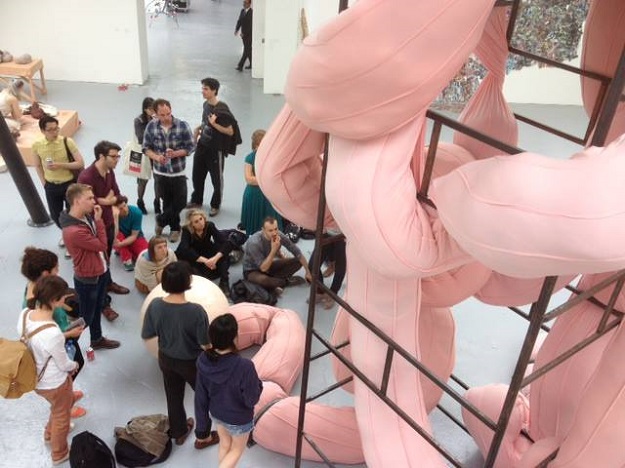 Lauren Kelly has been invited as Guest Speaker for the Onion Discussion Lecture Series on: ‘Performing Skill – Considering the Performance of Skill, Technique and Facility’ at the Departure Foundation, London on Wednesday 20th November 6-8pm